‘Civil aviation sector development should not be chaotic’

“We have shown a growth of 22 per cent and it has never happened anywhere else in the world before. No other country has achieved 22 per cent growth rate today,” Civil Aviation Secretary R N Choubey said here. 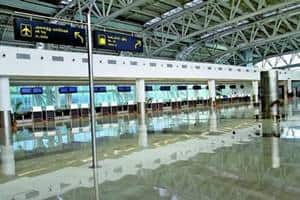 The rating agency made this comment with reference to DIAL's proposed masala bond and the dollar-denominated bond issue and the rationale behind the 'BB' rating assigned to the issue. (PTI)

Mirroring the huge growth potential, India’s civil aviation segment has seen a growth of 22 per cent, which has not been witnessed in any other country.

“We have shown a growth of 22 per cent and it has never happened anywhere else in the world before. No other country has achieved 22 per cent growth rate today,” Civil Aviation Secretary R N Choubey said here.

“It has been said that it has been happening largely because of the fall in oil prices. Well, oil prices have fallen in parts of the world, (but) no one has achieved this growth rate,” he noted.

According to him, such a situation also brings growth challenges such as the need to have more airports quickly and also impart skill to more people in the civil aviation sector.

“If we fail in meeting these growth challenges, then probably what has happened in urban development leading to slums, that kind of chaotic development should not happen in the civil aviation sector. We are committed to ensuring that it shall not happen,” Choubey said at an event here.

Speaking on the occasion, Civil Aviation Minister Ashok Gajapathi Raju said there is a mismatch in terms of skills in the aviation sector.

Emphasising the need for working together, he said, “we have a government which has a departmental approach but life is not compartmental.

“Probably lot of us will not land up in history books but all of us will have a role to play. When we play our role, the results will be there,” he added.

Rohit Nandan, Secretary at the Ministry of Skill Development and Entrepreneurship, said it has been decided that every Ministry would be coming with plans for skill development.

Minister of State for Skill Development and Entrepreneurship Rajiv Pratap Rudy was also present at the event.