With Chelsea not in action until Monday, 3 points for Manchester City against Crystal Palace on Saturday would take them level with Mourinho’s side. 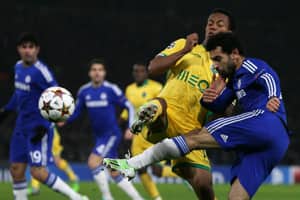 Chelsea will have no cause for concern if they are joined at the top of the Premier League by Manchester City, despite letting a healthy lead slip, manager Jose Mourinho said on Friday.

With Chelsea not in action until Monday, three points for Manchester City against Crystal Palace on Saturday would take them level on 39 points with Mourinho’s side, while a four-goal victory would put last season’s champions top.

Chelsea held an eight-point advantage over City in November, but Mourinho remains upbeat with much of the season to be played.

“Every game is three points and important. The accumulation is not for one team — it’s for every team.

“There is still a long time to go — not even 50 percent of the league is played. People with less than 10 points difference are in the title race.”

Chelsea will be boosted by the return of injured trio Didier Drogba, Kurt Zouma and goalkeeper Thibaut Courtois for Monday’s trip to 12th-placed Stoke City.

Mourinho’s side suffered a 3-2 defeat against Stoke at the Britannia Stadium last season and the Chelsea boss wants his side to be more aware of the threat posed by Mark Hughes’s men.

“Sometimes you play well and lose — other times you don’t play so well and win,” he said. “Last season we played well against Stoke but made two mistakes that cost us the game.

“We might be getting results but we have to go there and play our game. We know their qualities and will have to adapt to it.

“If you know you will play against Peter Crouch and their defenders and if you don’t adapt you are in trouble. They are a good and a difficult side.”

Mourinho is also confident that Eden Hazard will sign a new contract at Stamford Bridge and believes the Belgian forward has the potential to be one of the club’s greatest ever players.

“I think everybody knows about his potential,” he said. “He needs to win titles because titles make players’ history.

“No players are considered legends with clubs without winning titles so he has to do that.”