The prime minister’s warning comes as the government faces a furious opposition over the suspension of 12 Rajya Sabha MPs for their “violent behaviour” during the Monsoon Session. 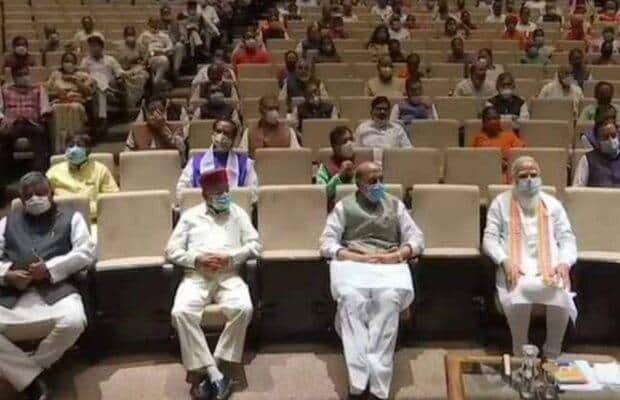 The prime minister's warning comes as the government faces a furious opposition over the suspension of 12 Rajya Sabha MPs for their "violent behaviour" during the Monsoon Session.

Prime Minister Narendra Modi on Tuesday stressed on the attendance of MPs in both the Houses of the Parliament and warned them of ‘parivartan’ (changes) if they don’t change themselves.

“Please be regular in attending Parliament and meetings. Even kids don’t like it when they are pointed at again and again. Please make a change, otherwise change happens on its own,” PM Modi said during the BJP Parliamentary meeting.

The prime minister’s warning comes as the government faces a furious opposition over the suspension of 12 Rajya Sabha MPs for their “violent behaviour” during the Monsoon Session. Both Houses have been facing continued disruptions and adjournments amid the Opposition’s protests over a range of issues, including civilians’ killings in Nagaland and farmers’ demand of legal guarantee of fair MSP along with compensation to farmers killed during the agitation against the farm laws.

On the suspension of Rajya Sabha MPs, Parliamentary Affairs Minister Prahlad Joshi reiterated today that the government was ready to revoke the suspension if the MPs agreed to apologise for their behaviour during the Monsoon Session. “We explained why they had to be suspended. The country has witnessed whatever took place. It’s on record. If they apologise even today, we’re ready to withdraw the suspension,” he said.

The poor attendance of BJP MPs has been flagged by Modi many times in the past also. At the meeting BJP President J P Nadda asked party MPs to call district presidents and presidents of mandals from their respective constituencies for tea and interact with them.

Similiarly, the prime minister will call district presidents from his constituency Varanasi on December 14 At the start of the meeting, tribal MPs including Union Minister Arjun Munda felicitated Prime Minister Modi for celebrating Birsa Munda’s birthday as ‘Jan Jatiya Diwas’. A book compiling the work done by various ministers on the Azadi Ka Amrit Mahotsav was also distributed among BJP MPs.