With this and the headway made in financial inclusion under the Jandhan programme, pan-India roll-out of direct benefit transfer (DBT) would be possible sooner than expected, official sources said. 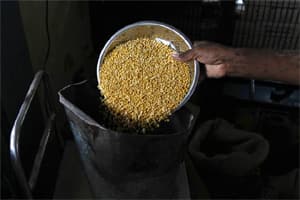 According to the food ministry, Andhra Pradesh, Telangana, Chhattisgarh and Rajasthan, besides UTs Chandigarh and Andaman and Nicobar, have completed seeding of all the ration cards with Aadhaar. (Reuters)

In what would aid the government’s effort at curbing the pilferage from the public distribution system and rationalising its food subsidy outgo, all 24 crore ration cards in the country have got digitised, with more than half of these seeded with the unique identification number Aadhaar. This has already led to the weeding out of a large number of duplicate ration cards.

With this and the headway made in financial inclusion under the Jandhan programme, pan-India roll-out of direct benefit transfer (DBT) would be possible sooner than expected, official sources said. The rapid spread of mobile telephony would accelerate the process, they added.

The process of installation of electronic point of sale (ePoS) devices at fair price shops (FPSs) , which is meant to track the sale of foodgrains to actual cardholders on a real-time basis, is also under way. So far, 1.23 lakh FPSs or close to a quarter of such shops in the country have been ePoS-enabled. The target is have 3 lakh shops equipped with e-POS devices by March, 2017. With 100% of the states’ FPSs having e-POS, Andhra Pradesh has saved an estimated R1,000 crore in food subsidy, a pointer to by how much DBT-Aadhaar and ePoS could together reduce the Centre’s subsidy bill. The Centre allocates 50-55 million tonnes of rice and wheat annually to implement the National Food Security Act.

Also Read: FCI gets Rs 25,000 cr as food subsidy a month in advance

Thanks to a pilot project to use the DBT platform for food subsidy, some 2.4 lakh households in Puducherry, Chandigarh and Dadra and Nagar Haveli already get the subsidy in their bank accounts.

In a recent interview to FE, finance secretary Ashok Lavasa said disbursal of benefits under as many as 147 schemes will be facilitated by the DBT platform by the end of the current financial year; last year, 67 schemes were DBT-enabled. The Centre disbursed Rs 62,000 crore to 30.8 crore beneficiaries via DBT-enabled schemes in FY16.

According to the food ministry, Andhra Pradesh, Telangana, Chhattisgarh and Rajasthan, besides UTs Chandigarh and Andaman and Nicobar, have completed seeding of all the ration cards with Aadhaar.

States such as Kerala (95%), Haryana (88%), Jharkhand (87%), Maharashtra (87%) and Gujarat (78%) have also reported significant progress in terms of seeding of PDS beneficiaries’ cards with Aadhaar.

On ePoS device installation, Andhra Pradesh, Madhya Pradesh and Gujarat have almost completed the process, while others like Chhattisgarh and Rajasthan are catching up. States with large poor populations like Uttar Pradesh, Bihar and Odisha have, however, yet to make any headway in equipping their fair price shops with ePoS instruments.

Next Story
No relief for DND flyway commuters; here’s why