A bench of Chief Justice D N Patel and Justice Jyoti Singh heard the arguments put forward by Swamy, Solicitor General Tushar Mehta and senior advocate Harish Salve, who appeared in the matter on behalf of AirAsia, and said it will pass an order on the petition on January 6. 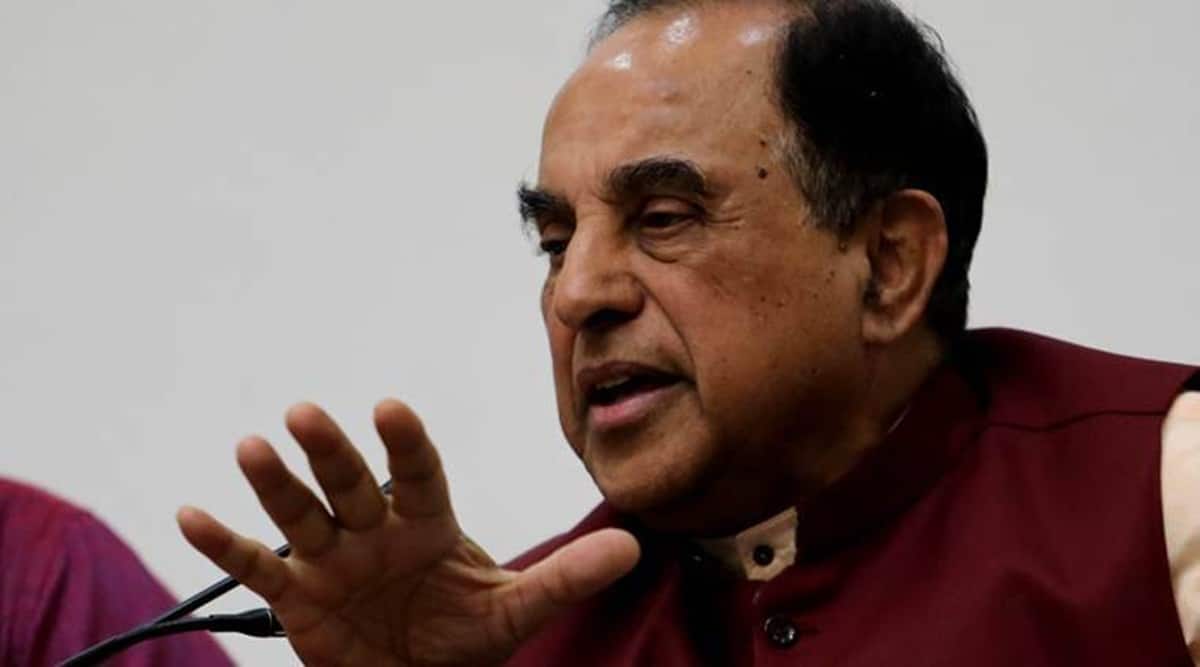 Swamy, a Rajya Sabha MP, has sought to set aside and revoke any action or decision or grant of any further approvals, permissions or permits by the authorities with respect to the Air India disinvestment process. (Photo source: IE)

The Centre on Tuesday opposed a plea filed by BJP leader Subramanian Swamy in the Delhi High Court alleging that the methodology adopted by the government in the valuation of national carrier Air India was “arbitrary, illegal and against public interest”.

Swamy has sought to set aside and revoke any action or decision or grant of any further approvals, permissions or permits by authorities with respect to the Air India disinvestment process.

A bench of Chief Justice D N Patel and Justice Jyoti Singh heard the arguments put forward by Swamy, Solicitor General Tushar Mehta and senior advocate Harish Salve, who appeared in the matter on behalf of AirAsia, and said it will pass an order on the petition on January 6.

It further asked the petitioner to file legible copies of certain documents annexed with the petition.

Swamy has also sought a CBI investigation into the role and functioning of authorities and the submission of a detailed report before the court.

In October last year, the Centre accepted the highest bid made by a Tata Sons company for 100 per cent equity shares of Air India and Air India Express, along with the government’s 50 per cent stake in ground-handling company AISATS — the first privatisation in the country in 20 years.

Swamy submitted that a consortium led by SpiceJet was the other bidder but as insolvency proceedings are going on against the airline in the Madras High Court, it was not entitled to bid and therefore, effectively there was only one bidder.

“The methodology adopted by the government in the valuation of Air India was arbitrary, illegal, corrupt, mala fide and against public interest,” he said.

Mehta contended that the petition was founded on three misconceptions and it does not need any consideration.

He said according to the petitioner, SpiceJet was the second bidder, but the fact is that the airline was never a part of the consortium that submitted the bid and proceedings pending against it have no relevance here.

“One individual, Ajay Singh, was part of the consortium, which was the second bidder and not SpiceJet,” the solicitor general said.

He said Air India’s disinvestment was a policy decision taken by the Centre, keeping in view the huge losses being incurred by the airline, and that the government was competent to take such a decision.

“In 2017, a decision was taken that whenever the disinvestment process takes place, the losses up to that date will be borne by the government. But the losses after that date will be borne by the company which will acquire Air India. So this is not a decision taken today to help a particular party and to say at the fag end of the disinvestment process that the 2017 decision was faulty is not correct,” Mehta argued.

Regarding Talace Private Limited, a Tata Sons subsidiary that won the bid for acquiring Air India, he said neither the firm nor the Tata group has any criminal proceedings pending against it and it has nothing to do with the AirAsia group.

Salve also contended that there was nothing in the petition and that the bids were complete, the share agreements signed and all this has been in public domain for quite some time.

He said the airline business is tough to manage and there are very large transactions, adding that if a person comes at this stage and keeps things pending with a writ petition, no one will invest in it.

“Already, employees are getting nervous whether they will be paid their salaries or not. The government has given assurances. It was trying to sell Air India since 2017 and now it has managed to sell it,” Salve said, adding that the petitioner has not put forward any material on the basis of which he is alleging corruption in the process.

Swamy said he is not opposing the policy of disinvestment and he has always believed in the idea of a free market, but he is raising the issue of “impropriety, illegality, misconduct and corruption” in the process.

“I am in favour of disinvestment but this is gigantic corruption in my view. I am complaining about the rigged procedure. It is rigged in favour of Tata companies,” he contended.

When the court pointed out that the Centre itself is saying it was decided in 2017 that till this date, it will bear the losses incurred by Air India, Swamy said the issue is not about losses.

“Just because a PSU is losing money does not mean it is to be privatised,” he added.

The government signed the share purchase agreement with Tata Sons on October 25 last year for the sale of Air India for Rs 18,000 crore. The Tatas would pay Rs 2,700 crore in cash and take over Rs 13,500 crore of the airline’s debt.

The Tatas beat the Rs 15,100 crore offer from a consortium led by SpiceJet promoter Ajay Singh and the reserve price of Rs 12,906 crore set by the government for the sale of its 100 per cent stake in the loss-making carrier.

As of August 31, 2021, Air India had a total debt of Rs 61,562 crore, of which 75 per cent or Rs 46,262 crore will be transferred to a special purpose vehicle, Air India Assets Holding Limited (AIAHL), before handing over the airline to the Tata group.