Cauvery Water dispute: 30-40 buses set on fire in a depot in Bengaluru

Thirty to forty buses have been set ablaze at city’s KPN bus depot, a report said 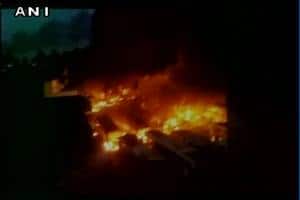 Violent protests over Cauvery Water sharing dispute continue unabated in Bengaluru. Thirty to forty buses have been set ablaze at city’s KPN bus depot, a report said. Protestors went beserk notwithstanding the prohibitory orders imposed by the city administration across the Karnataka capital.

Earlier, Karnataka Home Minister G Parameshwara called for “peaceful protest” citing that “injustice has been done to” the state. He vowed to “fight” the issue “legally” even as Bengaluru witnessed a string of violent protets throughout the day.

Earlier in the day, protesters vandalise lorries bearing Tamil Nadu registration numbers near Hubli Bypass. The Karnataka State Road Transport Corporation has temporarily suspended its services from Bengaluru to Tamil Nadu. 200 protesters, who were involved in such acts in the state, have been detained as police resorted to lathi charge to disperse the crowd.

To prevent any untoward incident, the city administration has taken steps. As a preventive measure, Section 144 CrPC imposed in Bengaluru City from 5 PM today. 15,000 police men and officers have been deployed across the city along with around 270 Cheethas (police patrol vehicles) to maintain strict vigil.