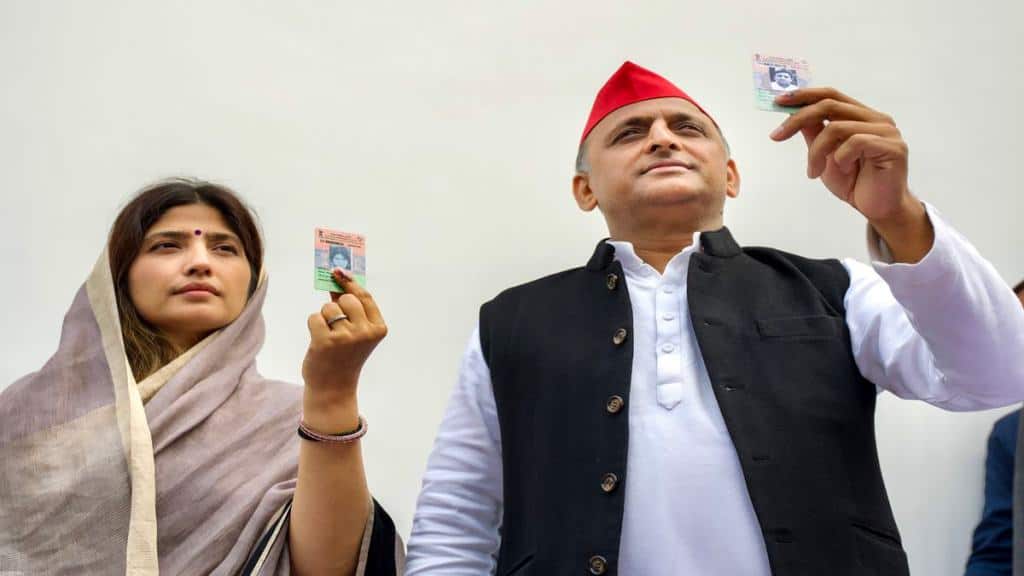 The BJP, on the other hand, won the Rampur Sadar assembly seat for the first time as its candidate Akash Saxena defeated his nearest Samajwadi Party rival Asim Raja. Bypoll to the Rampur Sadar seat, considered an Azam Khan stronghold, was necessitated after the SP leader was sentenced to three years in jail in a hate speech case, and subsequently disqualified as MLA. Saxena, who won by a margin of 33,702 votes, has been handed over the winners certificate by the Returning officer. The bypolls to the one Lok Sabha seat and six Assembly seats were held on December 5.

Considered as the SP's bastion, the seat was held by party founder and Dimple Yadav's father-in-law Mulayam Singh Yadav and got vacated after his death on October 10.

The RLD thanked the people of Khatauli for its victory. “Thank you Khatauli. This historic victory of alliance candidate Madan Bhaiya is the victory of the hard-working workers of Rashtriya Lok Dal, Samajwadi Party and Azad Samaj Party,” the RLD said in a tweet in Hindi.

Samajwadi Party ally Rashtriya Lok Dal on Thursday won the Khatauli bypoll in Uttar Pradesh, with its candidate Madan Bhaiya defeating his BJP rival Rajkumari Saini by a margin of over 22,000 votes.

Madan Bhaiya polled 97,071 votes, while Saini received 74,996, according to the Election Commission.

Saini is the wife of former BJP MLA Vikram Singh, whose disqualification from the state assembly following his conviction in a 2013 Muzaffarnagar riots case necessitated the bypoll.

Congress is leading in the Sardarshahar assembly seat in Rajasthan's Churu district. In the initial round, the Congress has got 6,853 votes followed by the BJP with 3,862 votes, and Rashtriya Loktantrik Party of Nagaur MP Hamuman Beniwal with 3,007 votes, according to the Election Commission.

The opposition BJP and the ruling JD(U) in Bihar were fighting neck and neck with the latter gaining a lead of 1,802 votes after the ninth round of counting in the bypoll for by-election to the Kurhani assembly constituency in Muzaffarpur district.

Gupta was leading till the eighth round of counting.

The ruling Biju Janata Dal (BJD) extended its lead to 15,541 votes over the BJP after the eighth round of counting for the by-poll to the Padampur assembly seat.

In the fourth round, the BJD nominee was leading by 8,178 votes. Congress candidate Satya Bhusan Sahu bagged 1,634 votes.

SP candidate Dimple Yadav has taken a huge lead from Mainpuri Lok Sabha seat as counting of votes is underway.

Altogether 13 candidates, five of them Independents, are in the fray though the contest is being seen, primarily, as between the BJP's Kedar Gupta and the JD(U)'s Manoj Singh Kushwaha. Both are former MLAs.

Gupta had lost to Sahani by less than 700 votes in the 2020 assembly polls which BJP and JD(U) had fought in alliance. Now, the JD(U) is a part of “Mahagathbandhan” comprising RJD, Congress and the Left parties.

The by-poll was necessitated by the disqualification of sitting RJD MLA Anil Kumar Sahani.

Counting of votes for the by-election to Kurhani assembly constituency in Bihar's Muzaffarpur district is underway on Thursday. Elaborate security arrangements have been made for the counting centre at the RDS College in Muzaffarpur.

There were 10 candidates in the fray including ruling BJD's Barsha Singh Bariha, the daughter of late MLA Bijay Ranjan Singh Bariha, whose death necessitated the by-poll.

The BJP has fielded former legislator and party's Krushak Morcha president Pradip Purohit as its candidate while three-time MLA Satya Bhusan Sahu is the Congress candidate.

Counting of votes for the by-poll to Padampur assembly seat in Odisha's Bargarh district is underway on Thursday. Counting began at 8 AM at the RMC Yard near the Padampur sub-collector's office.

A high turnout of 81.29 per cent was recorded in Padamppur during the by-election held on Monday.

Chief Electoral Officer S K Lohani said tight security arrangements are in place with deployment of around three companies of central paramilitary force in the inner cordon and state armed police in the outer area.

The constituency recorded a voting percentage of 72.09 per cent on polling day on Monday. A total of 2,89,843 voters were eligible to exercise their franchise in the bypoll necessitated by the demise of Congress MLA Bhanwar Lal Sharma, who passed away on October 9 after prolonged illness.

Polling was held amid tight security arrangements across all 295 booths in the assembly segment.

Counting of votes for the bypoll to Sardarshahar Assembly seat in Rajasthan's Churu district began on Thursday morning, which commenced at 8 am.

In the 2018 Assembly elections, Congress's Manoj Singh Mandavi had defeated BJP's Deo Lal Dugga by a margin of 26,693 to win the Bhanupratappur seat.

The Congress registered a landslide victory in the 2018 polls by winning 68 seats in the 90-member House. The BJP had managed to win just 15 seats, while the Janata Congress Chhattisgarh (J) and the Bahujan Samaj Party bagged five and two seats, respectively.

Subsequently, the state witnessed bypolls to four Assembly seats all of which were won by the Congress.

The ballot count began on Thursday morning at the Bhanu Pratap Dev Government PG College in Kanker town where an adequate number of security personnel have been deployed.

Postal ballots will be counted first followed by votes cast in the Electronic Voting Machines (EVMs), an official said, adding the entire process will be completed in 19 rounds.

The bypoll in Bhanupratappur was necessitated following the death of Congress MLA and deputy speaker of Assembly Manoj Singh Mandavi on October 16.

Though seven contestants were in the fray, the main fight was between the ruling Congress and the opposition Bharatiya Janata Party (BJP). (PTI)

Counting of votes for byelection to the Bhanupratappur Assembly seat in Chhattisgarh began at 8 am on Thursday with the ruling Congress eyeing to retain the tribal-dominated constituency.

A voter turnout of 71.74 per cent was recorded in the bypoll held on December 5 for the seat, reserved for Scheduled Tribe candidates and located in the Maoist-affected Kanker district.

Khatauli assembly segment in Muzaffarnagar had recorded 56.46 per cent polling on December 5 while Rampur had seen a low 33 per cent voting. In Khatauli, the fight is between Vikram Singh Saini's wife Rajkumari Saini and Madan Bhaiya of the RLD.

Hello Readers! Welcome to our live blog on By-Election Results 2022. We will keep you updated with the latest and fresh news on the results. Stay Tuned!

The bypolls in Rampur Sadar and Khatauli were necessitated after SP MLA Azam Khan and BJP MLA Vikram Singh Saini were disqualified following their conviction in separate cases. In Mainpuri, Akhilesh Yadav’s wife Dimple Yadav is pitted against BJP’s Raghuraj Singh Shakya, once a close associate of Shivpal Singh Yadav. It had recorded a turnout of 56.61 per cent in the 2019 polls.