BJP leader Vinod Arya’s son Pulkit Arya, along with two others, have been arrested by the police on Friday. 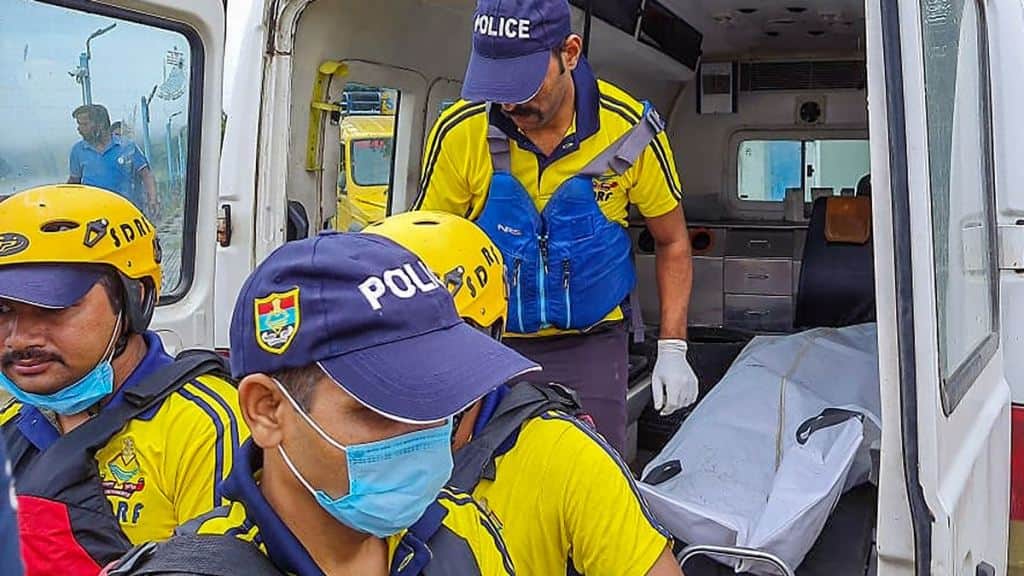 Body of Ankita Bhandari, who was murdered allegedly by the resort owner and thrown into the Cheela canal, inside an ambulance after police recovered it, in Rishikesh. (PTI Photo/File)

Brother of Ankita Bhandari, the 19-year-old receptionist, who was allegedly killed by BJP leader’s son Pulkit Arya, has said that the family will not conduct her last rites until her post-mortem report is given.

“We saw in her provisional report that she was beaten up and was thrown in a river. But we are awaiting the final report, “Ajay Singh Bhandari, brother of Ankita Bhandari said, as quoted by ANI.

The family has also alleged that the state government had demolished the resort, where she worked, to destroy the evidence in the case, NDTV reported.

The Opposition had also raised questions on the demolition, with former Uttarakhand Chief Minister Harish Rawat calling it a “planned murder”.

“This is a planned murder. People suspect that this demolition was carried out to destroy evidence,” the Congress leader had told NDTV.

Her body was recovered from a canal on Saturday. The autopsy was done at the All India Institute of Medical Sciences, Rishikesh, police said.

BJP leader Vinod Arya’s son Pulkit Arya has been named the “main accused” in the case. He, along with two others, have been arrested by the police, and a court has sent them to 14-day judicial custody. The other two accused are resort manager Saurabh Bhaskar and assistant manager Ankit Gupta.

Director General of Police Ashok Kumar said that Bhandari was under pressure to provide “special services” to guests. This had been gleaned from her chat with a friend, he said, as reported by PTI.

Earlier in the day, Bhandari’s Facebook friend reportedly alleged that she was killed because she refused to have sex with guests as demanded by Pulkit Arya.

Bhandari had reportedly called a friend the night before she was reported missing to say she was in trouble, according to local reports.

Meanwhile, the ruling Bharatiya Janata Party (BJP) swung into action to expel Vinod Arya and his other son Ankit Arya, barring them from holding any posts.

Vinod Arya had formerly served as chairperson of the Uttarakhand Mati Board with a state minister’s rank. Ankit Arya has now been removed as vice president of Uttarakhand OBC Commission.

On Friday, acting on orders of Uttarakhand Chief Minister Pushkar Singh Dhami, authorities had also bulldozed portions of the Vanantra Resort, owned by Pulkit Arya, on grounds of illegalities.

Meanwhile, on Saturday, violent protests erupted in areas surrounding the resort with locals breaking glass panes and some trying to torch a pickle factory in its premises.

BJP’s Yamkeshwar MLA Renu Bisht’s car was also attacked near the Cheela canal. The crowd broke the rear windscreen of her car, and Bisht was escorted to safety by police personnel.

The CM has ordered a Special Investigation Team (SIT) to be formed to probe the case headed by DIG PR Devi.