The first meeting of the BJP Legislature Party in Assam will be held on May 22 here to elect the party’s chief ministerial candidate Sarbananda Sonowal as its leader. 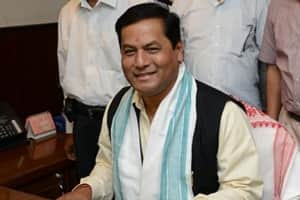 Sonowal enquired into the progress of double-tracking work on Guwahati-Lumding section and directed them to ensure its early completion, an official release said here. (PTI)

Newly-elected BJP legislators in Assam will meet here on May 22 to elect Sarbananda Sonowal as the leader of the legislature party formalising the choice as new chief minister of the state.

The new BJP members of the Assam Assembly today informally met under the leadership of 53-year-old Sonowal, who is now Union Minister of Sports, at the party headquarters here, spokesperson Himanta Biswa Sarma said.

Sonowal, who came into politics as a student leader belonging to AASU in the 1980s during the agitation against influx from Bangladesh, had joined BJP five years ago, and was made its chief ministerial candidate in the election.

The BJP and its allies AGP and Bodo People’s Front scored a landslide victory, cornering 87 seats in the 126-member Assembly.

The victorious BJP legislators decided to have the first official meeting of the legislature party on May 22 where Sonowal will be elected as their leader, Sarma said.

BJP’s alliance partners, AGP and BPF, will meet the next day to elect Sonowal as the leader of the alliance, he said.

The new government will be sworn in on May 24 here in the presence of Prime Minister Narendra Modi, BJP president Amit Shah, all the chief ministers of NDA, including those in the northeast, besides senior central BJP ministers, Sarma said.

Sonowal will meet Modi and Shah on the election outcome and government formation, he added.
The BJP won 60 seats on its own, up from 5 last time. The AGP bagged 14 seats while the BPF secured 13 seats. Last time, the AGP had 10 and BPF 12.