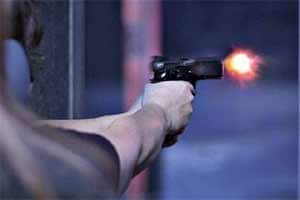 In yet another tragic incident, Bihar Bharatiya Janata Party (BJP) leader Ashok Jaiswal was shot dead in Danapur town, today. BJP has called for a shutdown in Danapur tomorrow following the death of the leader. Police is investigating the matter. More details are awaited yet.

The incident took place few days after one of the prominent BJP leader Brijpal Teotia was shot in Ghaziabad of poll-bound Uttar Pradesh. Brijpal Teotia, 54, is considered close to Home Minister Rajnath Singh and holds a massive support among the locals of the area. Teotia had suffered more than five bullet injuries in hundred rounds of open fire on his vehicle. Though, Uttar Pradesh police has arrested four people, namely Ram Kumar, Rahul Tyagi, Jitendra and Nishant, in connection with the case, union minister VK Singh who is also a member of parliament from the area, has demanded CBI probe into the matter. Police had initially said that personal enmity may be the reason behind the attack but the real motive is yet to be ascertained. The 54-year-old leader runs a real estate business and owns a large tract of agricultural land. Teotia’s role is considered crucial in setting up BJP’s base among the jat community and farmers of the area. Such is a support base of Teotia that he is popularly known as ‘Vidhayak ji’.