Jyoti Kumari, 15, reached her destination in Darbhanga with her father seated on the rear seat of the bicycle after seven days of journey from Gurugram. 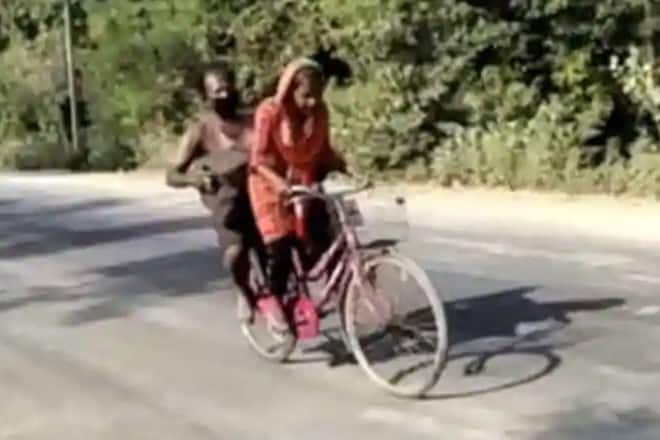 Jyoti Kumari cycled from Gurugram to Darbhanga in Bihar with her father riding pillion over seven days. (video grab)

The coronavirus-induced lockdown has been severe on migrants who are leaving no stone unturned to return to their native places. In a heart-wrenching story that has come to light now, a teenage girl braved all odds to travel 1,200 kilometres on a bicycle with her ailing father from Gurugram to Bihar to reach their native village.

Jyoti Kumari, 15, was in Gurugram just before the lockdown was announced. She had gone to Gururam in March to visit her father Mohan Paswan who was injured in an accident. But the girl was left stranded due to the nationwide lockdown announced by the government to limit the spread of coronavirus.

While Jyoti was looking after her father, her mother was taking care of her four younger siblings back home. Her mother works as an Aanganwadi worker in Darbhanga district of Bihar. Jyoti is a class eight student.

Paswan, who was unable to drive an e-rickshaw after the mishap, was given an ultimatum by his landlord to either pay the rent or leave. Left with no option, the 15-year-old had to make this tough decision and carried her father pillion on a bicycle she bought with borrowed money.

Jyoti reached her destination with her father seated on the rear seat of the bicycle after seven days of journey. Now, the duo is at a quarantine centre near their village Sirhulli under Singhwara block.

On the brighter side, the journey may prove a life-changing opportunity for Jyoti whom the Cycling Federation of India has invited for a trial next month. Federation’s chairman Onkar Singh said Jyoti, if she passes the trial, will be selected as a trainee at the state-of-the-art National Cycling Academy at the IGI Stadium complex in Delhi.