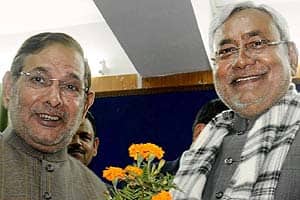 Ahead of tomorrow’s crucial trust vote in Bihar assembly, Nitish Kumar-led JD(U) today launched a scathing attack on Bharatiya Janata Party (BJP), holding it responsible for the current political turmoil and accusing it of trying to impose President’s Rule in the state.

Slamming BJP after its MLAs had yesterday favoured supporting the Jitan Ram Manjhi government during the trust vote, JD(U) President Sharad Yadav said earlier the saffron party was acting from behind the curtain but now the curtain has been lifted.

“The BJP is behind it… Ever since we left the NDA, BJP is looking at us as an enemy. We do not have any objection to that… We will fight, but fight an electoral battle. The Centre, which is suppose to govern as per the Constitution, has trampled upon democratic values.

“For all these days, the BJP was behind the curtain. Yesterday, they lifted the curtain. Tomorrow they (the BJP) will do something else,” Yadav told reporters here.

The JD(U) leader said that after losing the Delhi polls, BJP has become “desperate” and “restless” and wants to impose President’s Rule in Bihar. He also accused BJP of trying to lure JD(U) legislators and MLAs of its alliance partners.

“They are giving different types of offer. They are trying to buy out our MLAs and offering them ministerial posts. They are also threatening our MLAs. But none of our MLAs will switch sides,” Yadav said.

The JD(U) leader also accused Governor K N Tripathi of being “biased” and acting on behalf of BJP. “He is holding a constitutional post and the Centre is responsible for this (to ensure that he follows rules),” he said.

“We paraded our MLAs before the President and the Governor. We have 130 MLAs whereas BJP has only 87. There is no harm in asking for a trust vote in 2-3 days or 48 hours, but not for this long time,” he said.

“The Bihar CM has support of just 12 MLAs… On the other side, there are JDU, BJP, RJD, Left parties and Congress. Even the makers of the Constitution must have not thought about it. This was the reason why we asked the Governor to take the majority test at the earliest,” Yadav said.