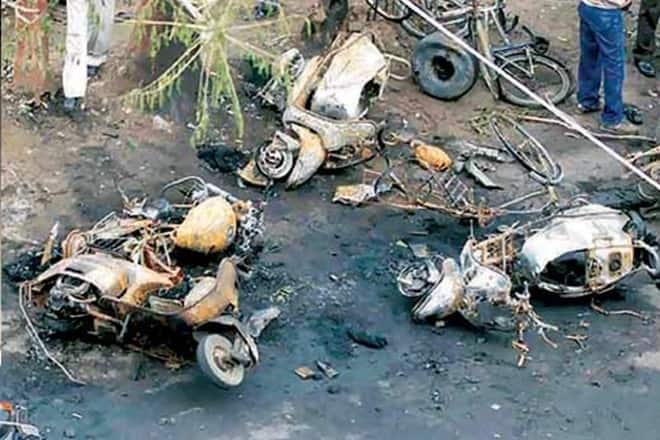 2008 Ahmedabad blasts: The 2008 Gujarat bombings mastermind Abdul Subhan Qureshi has been arrested by Delhi police, according to reports. Qureshi was the most wanted SIMI terrorist and also the mastermind of the 2008 Gujarat bombings in Ahmedabad. The 2008 Ahmedabad bombings were a series of as many as 21 bomb blasts that had hit Ahmedabad on 26 July 2008 within a span of 70 minutes. As many as 56 people were killed and over 200 people were injured. According to Delhi police, Qureshi was arrested from Ghazipur area of New Delhi.

In September 2008, police had arrested Abu Basher, who was the key accused in the Ahmedabad blasts case. Basher had had allegedly stayed in a house in New Delhi with terror mastermind Abdus Subhan Qureshi alias ‘Tauqeer’. Qureshi was also for the Delhi blasts.

Qureshi, who is an alleged bomb-maker, was arrested by the Special Cell of Delhi police after a brief exchange of fire. Earlier, Gujarat police had started the man-hunt for Qureshi just a day after 21 blasts had shocked Ahmedabad on July 26, 2008. Gujarat police had first announced Qureshi’s name as a suspect in the blasts while probing an email that had taken the responsibility of the bombings. The email was sent to TV channels using an American WiFi network.

Not just in Ahmedabad bombings, Qureshi was also wanted by the National Investigation Agency (NIA) other terror attacks – Delhi, Bengaluru, and 2006 Mumbai local train bombings. Qureshi has also been dubbed as India’s ‘Osama Bin Laden’ and a ‘techie-bomber’. He is reportedly an expert in changing his appearance. As per reports, Qureshi had worked in top IT companies of Bengaluru and Hyderabad.

Most the bombs during the 2008 Ahmedabad blasts had targetted city bus service of the Ahmedabad Municipal Transport Service. Two blasts had also taken on the premises of two hospitals. The terrorists had planted bombs tiffin carriers on bycycles, NDTV had reported. The report had also said that two live bombs were recovered from Maninagar- the constituency of then Gujarat CM Narendra Modi. More live bombs were recovered from Surat also.