The ‘Mehengai par halla bol’ rally was seen as the Congress setting the stage for the 3,500-km ‘Bharat Jodo Yatra’ that will be undertaken by party leaders. 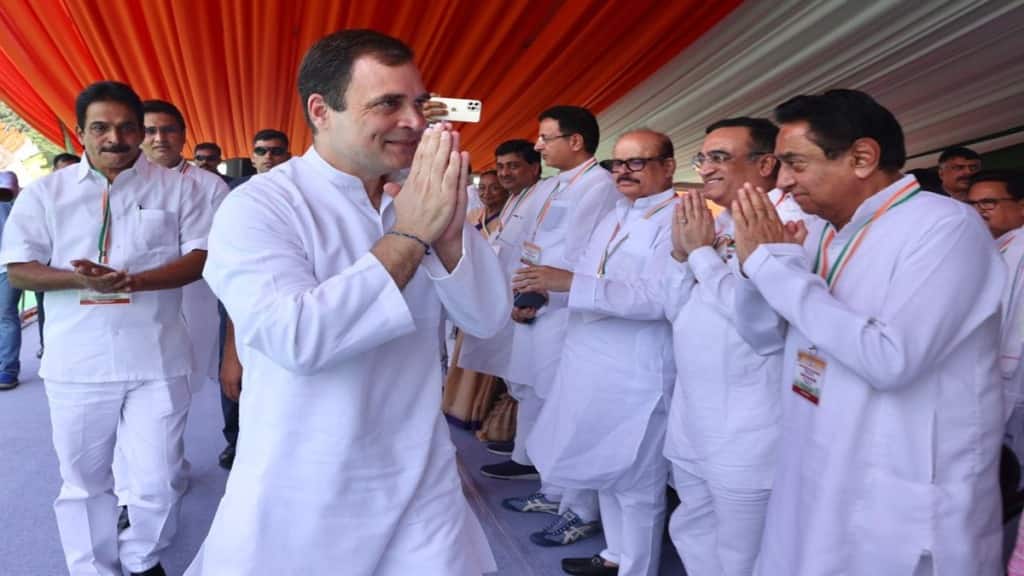 Congress leader Rahul Gandhi on Sunday led a fierce attack against the Centre on the issue of price rise, virtually setting the tone for a massive mass contact programme he is set to embark upon through his ‘Bharat Jodo Yatra’ that kicks off from Tamil Nadu’s Kanyakumari on September 7. Ahead of the yatra, one of the biggest that any Congress leader will embark upon in decades, the party held a ‘Mehengai par halla bol’ rally at Delhi’s Ramlila Maidan on Sunday.

The rally was seen as the Congress setting the stage for the 3,500-km foot march by party leaders. The rally witnessed huge crowds as party leaders, including former Congress president Rahul Gandhi, launched a scathing attack on the BJP and took up issues such as inflation and unemployment.

The ‘Bharat Jodo Yatra’ is being touted as the Congress party’s biggest ever mass contact programme, where party leaders will reach out to the common people at the grassroots level, and raise issues such as inflation and unemployment. Congress leaders, including the former Congress president, will hit the streets and embark on a 3,500 km padayatra (foot march) from Kanyakumari to Kashmir.

Senior Congress leader Jairam Ramesh said that the ‘Mehengai’ rally was not undertaken keeping in view the 2024 Lok Sabha elections, but rather from the point of view that these issues of inflation, and unemployment are pressing issues.

Women Congress workers who participated in the rally said they will be participating in the ‘Bharat Jodo Yatra’ as every household is affected due to rising prices. Speaking to Financial Express Online, Chetan, a Mahila Congress worker from East Delhi, said that with the rising inflation, the poor are the worst hit.

“Prices of cylinders, mustard oil, and pulses are getting high, coupled with inflation. Think about people from poor economic backgrounds. The issue of Goods and Services Tax (GST) is also bothersome, as mothers are not able to afford good clothes for their children. What is the point of such GST? We can see that the rich are becoming richer, while the poor, poorer,” she said.

General Secretary of the All India Mahila Congress and former member of the National Commission for Women (NCW) Shamina Shafiq said that the ‘mehengai’ rally was purely concerned with the rising prices in the country and that which affects each individual.

“Every household, every woman as well as men are really worried about the finances, and how to manage the finances of the household because everything is getting expensive…the problem with the BJP government is that they are not ready to see that there is a problem. You can only sort a problem, when you acknowledge that there is an issue…and this is exactly what Rahul Gandhi and other Congress leaders wanted to echo today that rising prices are an issue, not just in Delhi but across India,” she said.

“In the Bharat Jodo Yatra as well, the Congress will be speaking about all these issues only. Why India needs to get united, why Congress needs to reach out to everyone to ensure that everyone is united is because these are issues that affect every common Indian. This is the basic premise of the rally today,” she added.

Meanwhile, the rally also saw a growing chorus among Congress leaders and party workers favouring Rahul Gandhi as the prime ministerial candidate for the 2024 polls.

Congress leader Imran Pratapgarhi said that Rahul Gandhi must be the prime minister of the country and for that leaders, as well as party workers, will fight for it. “Except for Rahul Gandhi, no one can take the country forward. This is the truth,” he said.

Congress workers, who flew from Andhra Pradesh’s Tirupati, have also weighed on Rahul Gandhi as the PM candidate for the upcoming elections.

The ‘mehengai’ rally coupled with the Bharat Jodo Yatra is being seen as a bid by the party to revive itself ahead of the Lok Sabha elections in 2024. The party, in its worst crisis ever, has been stung by a string of electoral defeats since 2014 and witnessed a mass exodus within the party’s rank and file, including some of its senior-most leaders from across the country.