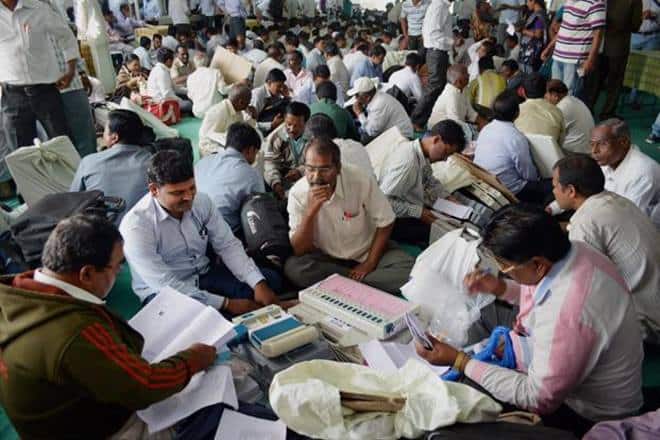 Counting of votes for bypolls in Kerala, UP, Chhattisgarh and Tripura is underway. (File Photo/PTI)

In Uttar Pradesh’s Hamirpur, BJP candidate Yuvraj Singh defeated Samajwadi’s Party’s Manoj Prajapati by the margin of 17,00  votes. Results of Tripura’s Badharghat seat has also been announced where BJP’s Mimi Majumdar defeatred her CPI(M) rival by a margin of 5,000 votes.

In Chhattisgarh’s Dantewada, Congress candidate Devti Karma of the Congress hdefeated her nearest rival Ojaswi Mandavi of the BJP. Polling on the four Assembly seats was held on September 23.

By-election on Kerala’s Pala seat was necessitated following the death of sitting MLA KK Mani of Kerala Congress-M party. After the death of Mani, who was also the chief of the party, an ugly war erupted between his son and a faction within the party to take control KC-M. The party finally got split between the two groups.

Moreover, the bypoll is also a litmus test for the ruling CPIM-led LDF and the BJP-led NDA which would be hoping to propel its chances in the upcoming October 21 bypolls on five more seats by registering a victory on Pala seat.

Devti Karma of the Congress defeated Ojaswi Mandavi of the BJP by 11192 votes to win the Dantewada assembly bypoll in Chhattisgarh. The ruling Congress now has 68 members in the 90-strong house.

The Congress candidate Devti Karma defeated her nearest BJP rival after taking a handsome lead earlier.  She defeated Ojaswi Mandavi of the BJP by a margin of 11,192 votes to win the Dantewada assembly bypoll. Congress now has 68 members in the 90-Assembly house.

In Kerala’s Pala constituency , Left-backed candidate has ended the five-decade-old supremacy of the Kerala Congress (M). The election in Pala was was necessitated after death of sitting legislator KM Mani in April this year.

What will Dantewada win mean for Congress?

If the Congress party wins the bypolls in Dantewada, this will help the ruling party in the state to have the hold of all 12 seats from Bastar. It will also now have 69 out of the total of 90 seats inthe state Assembly.

The BJP continues to its domination in Uttar Pradesh with ist party winning the Hamirpur Assembly bypoll by a margin of 17,000 votes. BJP’s Yuvraj Singh defeated his nearest rival, SP’s by a margin of 17771 votes.

Congress’ Devti Kamra is leading in the Dantewada bypoll by a margin of 10,000 votes. As per reports, the BJP has already conceded defeat. Former chief minister and senior BJP leader Raman Singh has alleged that the Congress used state machinery to win the bypoll in Dantewada.

The NDA in Bihar has cited an “unavoidable circumstances” to postpone a joint press meet, where names of candidates of the JD(U), the BJP and the LJP for the upcoming by-polls were expected to be to be announced.

After 10 rounds of counting,  Congress candidate Devti Karma has taken a big lead of over seven thousand votes against her nearest rival BJP’s Ojaswi Mandavi  in Dantewada seat of Chhattisgarh. By poll was necessitated on the  seat following the death  of sitting BJP MLA Bhima Mandavi in Naxal attack in April.

Accepting defeat in Pala Assembly by poll, Kerala Congress (M) leader Jose K Mani said the party will examine the reasons behind the loss. “Politics is not about fearing defeat and brimming in confidence in a victory. Where has the BJP’s votes gone? It has gone definitely to the LDF. The UDF is united. Congress has fully supported us,” The Indian Express quoted Mani, as saying.

Mani C Kappan thanked  Kerala CM Pinarayi Vijayan,  and leaders of CPM other allies for helping win Pala assembly by-election by campaigning for him. Kappan accused the BJP of entering into a ‘vote-trading’ deal with the UDF.

Mani C Kappan of the LDF has pulled off a rather surprise victory in Pala assembly by-poll. Kappan has defeated Jose Tom who was fielded by the Congress-led UDF, by 2943 votes.

In Chhattisgarh, both the Bharatiya Janata Party and Congress would be hoping to register a victory on Dantewada Assembly seat. Both the parties are locked in a direct contest on the Naxal-affected constituency where polling was held following the death of sitting BJP MLA Bhima Mandavi in an attack triggered by the Maoists in April. While Congress would be wanting to strengthen its position in the Assembly by winning the Dantewada seat, the BJP is expecting to salvage some pride after the humiliating loss in state poll in December last year. The BJP has fielded Bhima Mandavi’s wife Ojaswi against Congress candidate Devti Karma, wife of party leader Mahendra Karma who was killed in a Naxal attack in Jhiram Valley in 2013. Total nine contestants were in the fray, but the main contest is between these two candidates. Polling on Hamirpur seat in Uttar Pradesh was necessitated after the conviction of former BJP MLA Ashok Chandel in a murder case. Chandel was sentenced to life imprisonment by a court in a murder case of five persons. Top contenders for the seat are BJP’s Yuwraj Singh, Samajwadi Party’s Manoj Kumar Prajapati, Bahujan Samaj Party’s Naushad Ali and Hardeepak Nishad of the Congress. Tripura’s Bhadarghat seat fell vacant after the death of sitting MLA Dilip Sarkar. The main contest here is between BJP’s Mimi Majumder, Left Front’s Bulti Biswas and Ratan Chandra Das of the Congress.