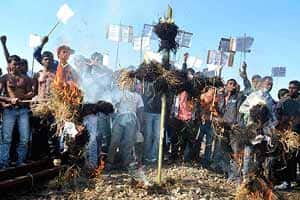 Fresh incidents of violence were reported in Kokrajhar district this morning in the aftermath of Tuesday’s killing of adivasis by NDFB (S) militants and retaliatory violence thereafter, with the toll of the victims increasing to 78 today.

After touring affected Sonitpur and Kokrajhar districts, Union Home Minister Rajnath Singh announced that the National Investigation Agency would probe the NDFB(S) attacks and assured the Assam government of Army’s assistance, if necessary, in its crackdown on militant organisations.

In the Gossaigaon area of Kokrajhar district several houses of Bodos were set ablaze by adivasis early in the morning despite an indefinite curfew clamped in the entire district, a police official said.

Sonitpur district bore the brunt of the violence where six more bodies were found this morning from Maitalu Basti under Zinzia police station bordering Arunachal Pradesh, taking the district’s individual toll to 43.

Three adivasis were killed in police firing on protesters yesterday to take the total number of dead in the district to 46.

In Kokrajhar, the other affected district, retaliatory violence by adivasis claimed the lives of four Bodos at Manikpur and Dimapur areas taking the total there to 29.

Curfew has been also imposed in the affected areas of Sonitpur and Chirang districts along with parts of Dhubri and Baksa districts as precautionary measure, he added.

The Home Minister told reporters at Biswanath Chariali in Sonitpur district during a visit, “We will take strong measures to deal with the outfit and will control it effectively. ”

“The Centre has adopted a zero-tolerance policy against all acts of terror and the similar policy will be adopted in this case too,” he said.

Later, the Home Minister, told a press conference in Guwahati at the end of his visits to Sonitpur and Kokrajhar districts, “I have spoken to the Assam CM and we have decided to investigate the entire incident by the NIA. We want to see the links of such groups. We want to know with whom they have connections.”

Singh said, “We cannot overlook it as a simple militant act. It is an act of terror. Both state and central governments will deal with it the way terrorism is dealt with,” he said.

He said the Centre has already provided 50 companies of paramilitary forces to Assam.

The minister ruled out talks with the group, saying “there will be no dialogues with such organisations. Only action will follow. There will be time-bound action, we don’t want to drag it. I have asked the state to directly start operations”. “Terrorists do not have religion, caste and region.They are only terrorists,” he observed.

The Union Minister for Tribal Affairs Jual Oram, who accompanied him, will stay in the area, visit the affected villages, talk to the people and submit a report to the Centre soon, he said.

The Home Minister also said that the Indian government had received assurance of cooperation from “one of the premiers” of Bhutan and Myanmar for flushing out terrorists from their territories.

Foreign Affairs Minister Sushma Swaraj informed him of this , he said.

He also informed reporters that Prime Minister Narendra Modi had taken the incident very seriously and announced Rs 2 lakh each for the family members of the dead.

In New Delhi, President Pranab Mukherjee strongly condemned the violence in the Kokrajhar and Sonitpur districts of Assam, saying such acts of terror and violence must be put down with a “firm hand”.

In his message to Assam Governor P B Acharya, the President said, “I am extremely saddened to learn about the cowardly attack by Bodo militants on the villagers in Kokrajhar and Sonitpur district of Assam in which a number of persons lost their lives and some others sustained injuries”. In Kolkata, West Bengal Chief Minister Mamata Banerjee said that her government was making necessary arrangement to render help to adivasis coming to the state from Assam for shelter.

“Many Adivasi families have started coming to our state for shelter. We have made necessary arrangements to help them and we will continue to do so,” she said.