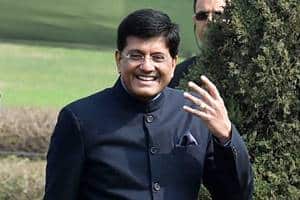 "Bribes are offered to linesmen and department officials, and may be politicians are also involved in it," Piyush Goyal said. (PTI)

“Already, the Chief Minister of Assam has conveyed to me that Assam wants to join Uday as soon as possible,” the Union Minister told reporters here on the sidelines of ‘National Workshop on Rooftop Solar’.

The other four states that recently went to assembly polls — Kerala, Tamil Nadu, West Bengal and Puducherry — had also evinced interest to join the scheme once the elections were over.

“Rest of four states (including West Bengal and Tamil Nadu) had indicated before the elections that they want to join Uday but they will join after elections. My department is constantly in touch with them,” the minister said.

Under UDAY, 10 states have signed MoU till date.

On his meeting yesterday with heads of all public sector banks on financing of UDAY, among others, the minister said there are “absolutely no worries (with regard to Uday)…I once again asked them (the bankers) for the fifth time whether they have any concerns…everybody has unanimously welcomed it and for your information Uday is turning out to be a game-changer”.

The minister also exuded confidence that Rajasthan’s discoms will be profit-making either by the end of next year or by early 2019.

On WTO dispute with regard to solar panel, the minister said, “Our position is very clear. Indian manufacturers have shown magnanimity and withdrawn their anti-dumping duty request. Despite that the United States pursued their WTO complaint and we are in appeal against that order which I am sure will be taken up by the WTO.”

Explaining further the minister said, “We have found” several procurement programmes of the states in the US, on which just before we were to file complaints, the US sought bilateral discussions.

“India is a country which believes in dialogue and amicable resolution of all disputes rather than going to courts. So we are really agreed and we are in dialogue,” the minister said.

The minister further said that Uday Bonds will be a hot property and “now Rajasthan is next in line and they are going like hot cakes.”

This innovative mobile approach shall enhance the employment of trained youth in solar PV technology and also improve the businesses of solar entrepreneurs because of quality servicing, maintenance and repairing. Professionals are now available to customers at the click of a button on their mobiles, he said.