Punjab Congress chief Amarinder Singh today accused Union Finance Minister Arun Jaitley of “using” the Enforcement Directorate and Income Tax department against him and his family and claimed there was no illegality in any transaction. 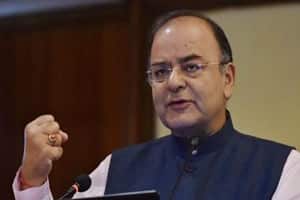 The Finance Minister will tomorrow address Business Forum Invest in India in which several Chinese businessmen and heads of state-run firms were expected to take part. (PTI)

Punjab Congress chief Amarinder Singh today accused Union Finance Minister Arun Jaitley of “using” the Enforcement Directorate and Income Tax department against him and his family and claimed there was no illegality in any transaction.

The ED has summoned Amarinder’s son Raninder, in connection with its probe against him for alleged forex contraventions and holding of untaxed foreign assets.

“He (Jaitley) has ED, Income Tax department under his ministry and is using those against me and my family members to avenge his defeat (from Amristar Lok Sabha seat),” he alleged.

“Next time, the ED may summon me…this will be built up till (Punjab) elections. This has been happening because elections are round the corner..after seven months they will forget it,” Amarinder claimed.

“I also got a notice from the Income Tax department when I was in the USA. I have replied to that. They can call the ED, Income Tax…we will come out clean,” he asserted, adding “There is no illegality and no breaking of Indian law at all.”

According to official sources, Raninder has been summoned by the ED to explain the alleged movement of funds to Switzerland and creation of a trust and a few subsidiaries in the tax haven of British Virgin Islands.

The said instances have earlier been investigated by the Income Tax department and a case in this regard is currently in court in Punjab. The next hearing in this case is slated for July 26.

Amarinder claimed that investigating agencies did not find anything wrong against him and his family members when the issue came up in 2005.

The Lok Sabha MP from Amritsar alleged that even Narendra Modi had spoken against him in Barmer during Lok Sabha elections in 2014 in order to help Jaitley win polls in Amritsar.

“When the BJP formed government, Jaitley asked a very senior officer to register a case against me within two months. The officer after few months even told him that there was nothing wrong against me,” he claimed.

“He (Jaitley) is a petty man. They have done it with P Chidambaram, Virbhadra Singh,” Amarinder alleged.

To a query on the role of Congress leader Jagdish Tytler in the anti-Sikh riots, Amarinder said that he had not heard his name from the victims of the violence in Delhi between November 1 to 4, 1984.

“Names of five people came up, who were Sajjan Kumar, H K L Bhagat, Dharamdas Shastri, Lalit Maken and Arjan Das. The name of Tytler appeared when he fought elections against Madan Lal Khurana in Delhi. If his name (Tytler) comes up during investigation, then hang him,” he said.

On the issue of pro-Khalistan slogans raised in the Golden Temple today, on the 32nd anniversary of Operation Bluestar, Amarinder said people now do not care about such slogans.

He criticised SAD(Amritsar) chief Simranjit Singh Mann for raising such slogans in the Golden Temple and accused SAD of “raking up the issue of Operation Bluestar when elections come near”.

The state Congress has also decided to launch a campaign to make people aware about the “failures” of the Central government and Punjab government on various issues including law and order, rising debt, farmers suicides.

All Assembly constituencies will be covered in 45 days starting form from June 24, for which the state has been divided into six zones and all party workers will be mobilised, Singh said.