Sri Sri Ravi Shankar’s Art of Living deposited the environment compensation through a demand draft to the DDA on June 3. 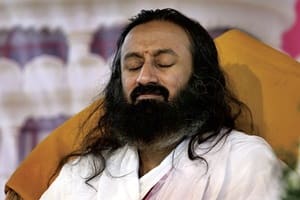 On March 9, the NGT refused to prohibit the holding of the World Culture Festival by Art of Living on the Yamuna floodplains. (AP)

The Art of Living (AOL) foundation has deposited Rs 4.75 crore “environment compensation” with Delhi Development Authority as directed by the National Green Tribunal for damaging Yamuna’s biodiversity during its ‘World Culture Festival’ in March.

Sri Sri Ravi Shankar’s Art of Living deposited the environment compensation through a demand draft to the DDA on June 3.

“Art of Living foundation has submitted a demand draft of Rs 4.75 crore as per the orders of the National Green Tribunal on June 3,” advocate Kush Sharma, appearing for DDA, told PTI.

The green panel had on June 3 directed the expert committee headed by Shashi Shekhar, Secretary of Ministry of Water Resources to inspect the site on Yamuna floodplains where the three-day festival was organised, before June 10. The panel had also asked to submit a “complete and comprehensive” report in a sealed cover by July 4.

The bench had said that if the inspection was not done before June 10, the whole purpose of the visit by the expert committee would be “defeated” as there were chances of rain.

The tribunal had slammed AOL for not depositing the environment compensation imposed on it saying it was “wilful violation” of its undertakings.

It had held that corporate entity cannot be used to promote irregularities and said it would even lift the “corporate veil” and find “real substance” of the matter while examining the case to ascertain the truth.

It had earlier dismissed AOL’s plea seeking its nod to accept the environment compensation as bank guarantee instead of “payment of balance amount” of Rs 4.75 crore.

The green panel on March 9 had refused to prohibit the festival held between March 11 and 13 but asked it to pay a compensation of Rs 5 crore for damaging biodiversity and aquatic life of Yamuna.

On March 11, AOL had moved a plea seeking four weeks time for depositing the amount after which the tribunal allowed the foundation to deposit Rs 25 lakh on that day and granted three weeks time period to pay the balance amount.