Reports suggests that the senior journalist might be starting a news channel with politician and entrepreneur Rajeev Chandrasekhar and American media baron Rupert Murdoch. 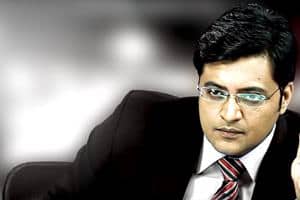 Following media reports on Arnab Goswami’s resignation as the Editor-in-chief of Times Now and ET Now, reports also suggests that the senior journalist might be starting a news channel with politician and entrepreneur Rajeev Chandrasekhar and American media baron Rupert Murdoch.

Arnab Goswami had been the Editor-in-chief of the television channels for the last ten years before he reportedly had announced his resignation in an editorial meeting today. Arnab Goswami’s controversial news show at 9, the Newshour debate, had been the key to pull prime time audience for the channel for years. Though in an interview to scroll.in, Goswami said that the Newshour is the reflection of the efforts of the entire editorial team.

Goswami was himself in the news recently when the Narendra Modi government provided him with Y-category’ security after he received threats from Pakistan based terror outfits.

The senior journalist, credited for the major success of the news channel, started his career at The Telegraph in Kolkata and then joined NDTV in 1995, becoming one of the most popular faces along with Vikram Chandra, Barkha Dutt and Rajdeep Sardesai. As soon as the report on Goswami’s resignation broke, social media platforms were flooded with reactions and tweets from different sectors.