Another batch of 1,621 pilgrims left Jammu on Wednesday to perform the Amarnath Yatra which has been proceeding peacefully in the Kashmir Valley, officials said. 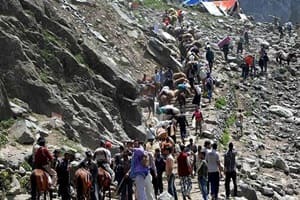 The latest batch, comprising 1,262 men and 359 women, left in a cavalcade of 49 vehicles from Bhagwati Nagar base camp. (PTI)

Another batch of 1,621 pilgrims left Jammu on Wednesday to perform the Amarnath Yatra which has been proceeding peacefully in the Kashmir Valley, officials said.

The pilgrims left Jammu in 34 buses and 15 light motor vehicles escorted by the security forces, a senior police officer told IANS in Jammu.

“Over 45,000 have performed the yatra so far using both the north Kashmir Baltal and south Kashmir Pahalgam routes” the official added.

Situated 3,888 metres above the sea level in Kashmir Himalayas, the cave shrine houses an ice stalagmite structure that wanes and waxes with the phases of the moon.

From Baltal base camp, the yatris trek 14 Kilometres to reach the cave shrine.

Those using this north Kashmir route return to the base camp the same day after having the ‘Darshan’.

The traditional Pahalgam route is 46-km long and takes three days for a pilgrim to teach the cave shrine from Nunwan (Pahalgam) base camp.

Helicopter services are also available for pilgrims from both the north and the south base camp sites.

Due to heightened militant activities this year in the Kashmir Valley, a three-tier security cover manned by the army, the ITBP, the CRPF and the state police has been put in place to secure the Yatra.

The 48-day long yatra started on July 2 and will conclude on August 17 coinciding with Shravan Purnima and Raksha Bandhan festivals.