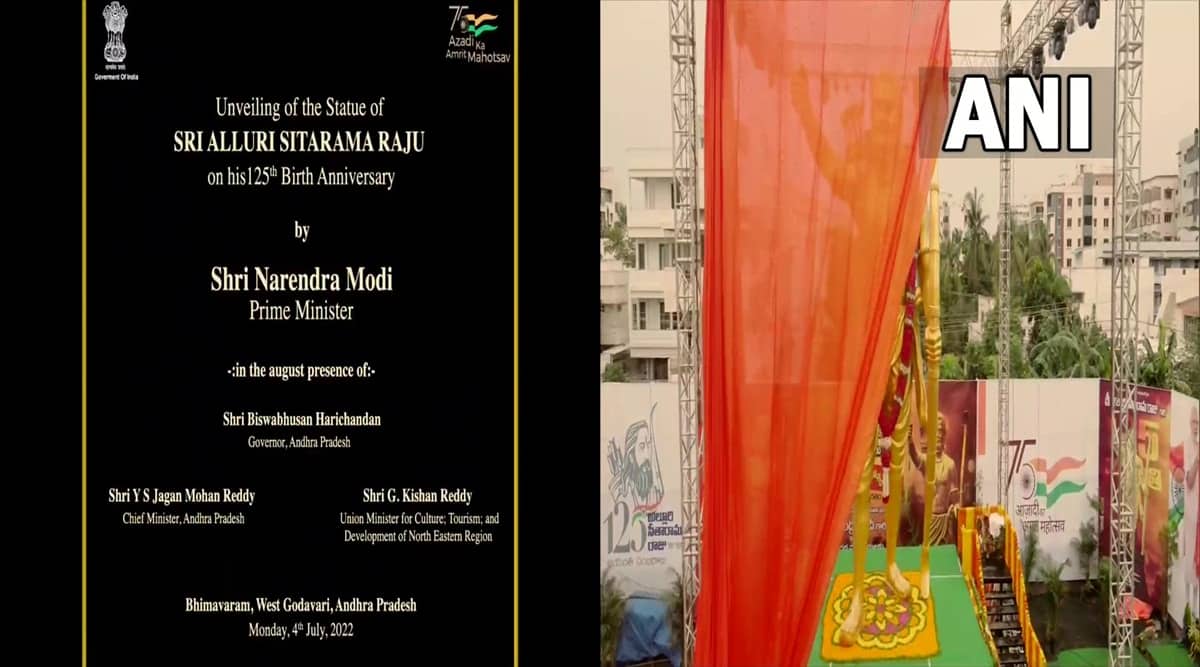 The 15-tonne statue was carved out at a cost of Rs 3 crore and installed by the Kshatriya Seva Samiti in the Municipal Park at ASR Nagar in Bhimavaram, as part of the Azadi Ka Amrit Mahotsav celebrations. (Photo source: ANI)

Prime Minister Narendra Modi here on Monday unveiled a 30-ft bronze statue of legendary freedom fighter Alluri Sitarama Raju on the latter’s 125th birth anniversary here. The 15-tonne statue was carved out at a cost of Rs 3 crore and installed by the Kshatriya Seva Samiti in the Municipal Park at ASR Nagar in Bhimavaram, as part of the Azadi Ka Amrit Mahotsav celebrations.

According to history, the regular patriotic discourse during the freedom struggle had a strong influence on Alluri since his childhood. Following the death of his father, his schooling got disrupted and he went on a pilgrimage and toured the western, northwestern, north and northeastern India during his teens. The socio-economic conditions in the country under the British regime, particularly in the tribal areas, deeply moved him.

During those journeys, he met revolutionaries in Chittagong (now in Bangladesh). Alluri then made up his mind to build a movement against the British. He organised the local Adivasis in the forest areas along Visakhapatnam and East Godavari districts into a potent force to launch a frontal attack.Thus was born the ‘Rampa Rebellion’ or the ‘Manyam Uprising’, in the Rampachodavaram forest area in the erstwhile East Godavari district, which rattled the mighty British forces.

The famed attack on the Chintapalli police station on August 22, 1922, with over 300 revolutionaries was the first in the series, which ended in a haul of firearms. The sheer audacity of Alluri in warning, in advance, the police of the date and time of the attack left the British stunned.

He enlisted the booty and signed the station diary after the attack, making it his hallmark. He led similar attacks later on Krishnadevi Peta and Raja Ommangi police stations. The revolutionaries under Alluri’s leadership snatched weapons and armoury in all such attacks. A large contingent of Reserve Police personnel from Visakhapatnam, Rajahmundry, Parvatipuram and Koraput was rushed to these areas led by British officers and, in the skirmish that ensued, two – Scot and Heiter – were killed by the revolutionaries on September 24, 1922, and several others wounded.

The Agency Commissioner J R Higgins had announced a prize of Rs 10,000 on Alluri’s head and Rs 1,000 each on his close lieutenants Gantam Dora and Mallu Dora. The British deployed hundreds of soldiers from Malabar Special Police and the Assam Rifles, led by top officers, to crush the movement. Alluri won the grudging admiration of the British as a formidable guerrilla tactician. Unable to contain the ‘Manyam’ uprising, the British government deputed T G Rutherford as the new Commissioner in April 1924 to quell the movement.

Rutherford resorted to violence and torture to know the whereabouts of Alluri and his key followers. It was a relentless chase by the British forces that cost them an overall Rs 40 lakh. Unable to stand the brutal repression against the tribals, Alluri finally gave himself up and was martyred on May 7, 1924. He lived only for 27 years, but close to a century after his martyrdom, the Telugus continue to revere and worship Alluri.