Alert! Bajrang Dal’s warning to couples on Valentine’s Day, find out what the outfit plans to do to lovebrids

Valentine’s Day has finally arrived and as lovebirds gear up to express their feelings to each other, Bajrang Dal has issued a warning for these couples. 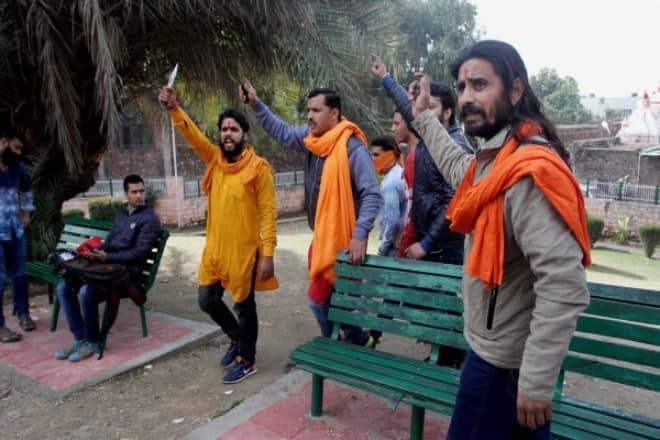 Valentine’s Day has finally arrived and as lovebirds gear up to express their feelings to each other, Bajrang Dal has issued a warning for these couples. The Hindu outfit has warned couples who are found celebrating the ‘alien’ festival in public, will be married with immediate effect. Bajrang Dal claims that Valentine’s Day is against Indian values.

On the Valentine’s eve, the members of the fringe group in Ahmedabad had put up posters asking girls to ‘say no to love jihad’. Several seminars were also organised in colleges with the help of Durga Vahini. In the seminars, the girls were asked not to fall for ‘love jihad’.

Gujarat: Posters put up by Bajrang Dal in Ahmedabad ahead of #ValentinesDay pic.twitter.com/9fl9y5haN0

Bajrang David activists have been asked not to indulge in any kind of violence and have been advised to demonstrate their stand but only in peace. The group, however, plans to move around on February 14 with saffron wooden sticks. They will be standing on guard in the areas commonly visited by young couples to instil fear in them.

Meanwhile, Lucknow University has issued circular ordering students not to roam around inside its premises on Valentine’s Day. The circular was released on February 10, and it said that disciplinary action would be taken against those who violate the order.

Lucknow University issues advisory to its students to not to roam inside the premises of the university on Valentine’s Day (14.2.2018). Disciplinary action will be taken against whosoever is found violating the advisory. pic.twitter.com/dQ8cdESICK

The Hindu outfit has also warned restaurants and pubs in Hyderabad no to celebrate Valentine’s Day. Members of the outfit approached some outlets in Banjara Hills and Jubilee Hills areas and asked the owners not to organise any Valentine’s Day event.

In the similar incident, members of Bajrang Dal took out an awareness rally in Nagpur and warned the couples of consequences. For many years, Bajrang Dal has been against Valentine’s Day celebrations and claims that the festival represents western values and that Indian youth were getting carried away by it.