Akhilesh Yadav vs Mulayam: What has happened so far, is this a planned ‘war’, will SP split; all you need to know

On Wednesday, Akhilesh Yadav dropped a ‘letter bomb’ on father Mulayam Singh Yadav, who is also the national president of SP. Akhilesh declared he would start his election campaign from November 3. 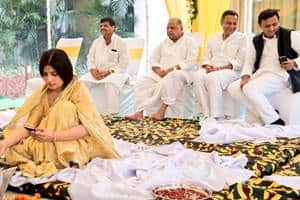 The latest move by Uttar Pradesh Chief Minister Akhilesh Yadav indicates that Samajwadi Party(SP) family feud is headed to become a fully blown war, which may even lead to a split in the party. On Wednesday, Akhilesh shot off a formal letter to father Mulayam Singh Yadav, who is also the national president of SP, declaring that he would start his election campaign from November 3.

While other parties have already launched their campaigns, SP has not been able to launch its campaign due to the family feud for power among Akhilesh, Mulayam and his brother Shivpal Yadav. With the letter, which many termed a ‘letter bomb’ on Wednesday, Akhilesh declared his intentions that he would not wait for anyone to come along for the party’s campaign. Reportedly, Akhilesh had been preparing for the campaign for long and had planned to launch it on October 3. However, the family tussle for power forced him to postpone the campaign.

Here we take a look at all that has happened for power within the Samajwadi Party family headed by Mulayam. We would also discuss if this entire family feud is a planned move of the party and if the SP is headed for a split.

Akhilesh Yadav vs Mulayam: What has happened so far

There is no doubt that there is a direct tussle for power among members of Mulayam’s family. Apparently, the power tussle started between uncle Shivpal and Akhilesh. But now it seems that there is a direct tussle between Mulayam and Akhilesh. Interestingly, all members of the SP family vow in the name of Mulayam. But in a bid to keep the command of the party in his hand, Mulayam has been apparently trying to derail Akhilesh’s election ambitions. Mulayam has also humiliated Akhilesh by making Shivpal as the state president of the party. Here is a brief timeline of how the power tussle has rolled out in the last few months.

August 2016: Shivpal Yadav threatened to quit SP citing lawlessness and rise in land-grab cases in the state. Making these allegations in Mainpuri, Shivpal had said: “Samajwadi Party will never allow harassment of the public…Iske liye chahe mujhe istifa kyun na dena pade (for this I am even prepared to resign)…Those involved in harassment of the people have no connection with SP).”

Mulayam launched an attack on Akhilesh. He said that ministers in the state were corrupt and a burden on the state. Mulayam warned that Shivpal’s resignation would put SP in ‘deep trouble’.

September 2016: In a bid to clean up the image of his government ahead of the Assembly elections, Akhilesh sacked his two important ministers facing graft charges. Both the ministers — Gayatri Prasad Prajapati and Raj Kishor Singh — were considered close to Mulayam.

Mulayam replaced Akhilesh by Shivpal as the SP state unit chief. In return, Akhilesh stripped Shivpal of all important ministries.
This is certainly not the end of the crisis in UP’s so-called first family. More trouble may be brewing in some corner.

Mulayam Singh Yadav maintains that all is well in the family and Shivpal will continue as the party’s state unit chief. However, Shivpal resigns from all posts in the party as well as the state government.

Shivpal’s supporters protest in UP, demand equal status for their leader in the party vis-a-vis Akhilesh. Talks of a division in the SP starts doing the rounds as both Akhilesh and Shivpal are adamant to relent.

October 2016: Akhilesh fails to start his election campaign on October 3.

Samajwadi Party top leaders try to limit the powers of Akhilesh in the party.

Akhilesh writes a letter to Mulayam, announcing he would launch his campaign on November 3.

SP MLC Udaiveer Singh writes a letter saying SP would break if Akhilesh doesn’t get the power he deserves in the party. He asks Mulayam to declare Akhilesh the national president of the party.

Another SP MLC Ashu Malik issues a counter statement, saying there is no alternative to Mulayam in Indian politics. Muslims are with Mulayam.

Akhilesh Yadav vs Mulayam: Is this a planned war?

With the family tussle now folding out in front of people of the state, there are a few who believe that it has all been planned in advance as it would allow Akhilesh to get people’s sympathy. He can project himself as a victim of the family’s lust for power. Akhilesh can also claim that he could have done more if he was free of the family. BSP chief Mayawati also says that the entire family tussle is scripted to give Akhilesh a backdoor entry to the CM office once again.

If the family tussle is not scripted, the party may be headed for a split. SP MLC Udaiveer Singh has indicated that the party may split if Akhilesh doesn’t get the power he deserves in the party. The appointment of Shivpal as the SP state president is being seen by Akhilesh’s supporters as an act to humiliate him.

In a letter to the party chief, Udaiveer Singh said SP would break if Akhilesh doesn’t get power over the party. He asked Mulayam to declare Akhilesh the national president of the party.

If either of Shivpal or Mulayam doesn’t back out of the tussle or compromise, the party can split. Senior journalist in Uttar Pradesh, Ram Dutt Tripathi believes Akhilesh’s letter to Mulayam was the last attempt by the UP CM for a compromise. Tripathi told ETV Uttar Pradesh during a debate that outside parties could also be involved in breaking the party. There could also be a corporate agenda to break the party, he said.