After expulsion from AAP, Yogender Yadav to connect with like-minded people through ‘Swaraj Yatra’ 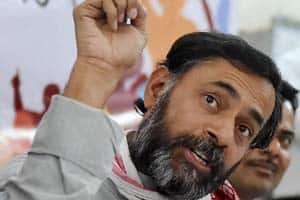 A day after his expulsion from Arvind Kejriwal-led Aam Aadmi Party (AAP), Yogendra Yadav on Tuesday said he would strive to create a “new model” and connect with the people by taking out a ‘Swaraj Yatra’ throughout the country in an effort to keep the spirit of the movement “alive”.

On the late night expulsion after months of churning within the party, Yadav said that he has asked AAP National Disciplinary Committee Chairperson Dinesh Waghela to list three reasons behind the extreme step.

“I have asked him to give me three reasons behind our expulsion in spite of our detailed replies to the show-cause notices. We are yet to get a formal copy of the expulsion order. Got to know everything through media till now,” Yadav told reporters this evening.

The first Samvad is scheduled to be held in Bangalore on April 29 while the second one will take place in Guwahati on May 1. Yadav said the group’s focus would be on the disillusioned sections of AAP, young entrepreneurs and social movement group.

On the possibilities of floating a political party, Yadav said forming a model of organisation along with preparing an agenda for India was crucial before taking any such step.

Yadav also sought an apology from the Arvind Kejriwal-led party for running a campaign charging him with working to defeat AAP in the elections and conspiring to unseat Kejriwal from the National Convenor’s post.

“For two months you run a vicious campaign against me saying I wanted the party to lose the elections and conspired to become the National Convenor. And when it comes to disciplinary committee and formal inquiry you just drop those charges and come up with another complaint with 12 new items.

“The old charges are mentioned towards the end of the letter. So someone does owe us an apology,” he said.

Striking a pensive note, Yadav also put out a Facebook post, saying his expulsion from the party was not a sad end, rather, the beginning of a “beautiful, long journey”.

"Many thoughts come to the mind. They say that whatever happened was for the good. A home is built by trust and not brick and mortars. Maybe one day we will bless those who have kicked us out. "Let the spirit of the movement be maintained. We will try to create a new model and we will connect with people who shares this belief with us," he said. The former member of AAP top bodies such as the Political Affairs Committee and the National Executive, said that Pankaj Gupta and Ashish Khetan, who were "complainants" became judges, which was "extraordinary". "It isn't possible that those who are complainants become judges. They (Gupta and Khetan) have in writing and in public made allegations against us. And yesterday they sat on the judgement for those very allegations. This is extraordinary," Yadav said on Tuesday. Yadav, along with Prashant Bhushan, Ajit Jha and Anand Kumar were expelled from the AAP for "gross indiscipline" and "anti-party activities" late Monday night.