After Ashok Gehlot’s outburst, is it the end of road for Sachin Pilot in Congress?

The chief minister on Monday called Sachin Pilot ‘useless’ using Hindi word ‘nikamma’ in a no-holds-barred attack on his former deputy with whom he has been locked in a power tussle since December 2018 when the party came to power in Rajasthan. 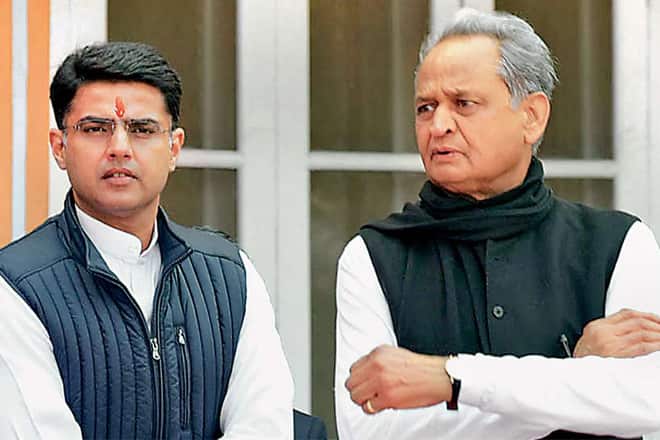 The Congress has claimed the support of 109 MLAs in the 200-member House and Gehlot has said that he has the majority.

Rajasthan Chief Minister Ashok Gehlot’s public outburst against Sachin Pilot on Monday has virtually dashed hopes of reconciliation with the rebel leader, according to a section of Congress leaders. Congress sources indicated that Pilot has been in touch with the leadership and efforts were continuing to pacify him and get him back to the party fold. However, some party leaders feel that Gehlot calling Pilot names and going public against him in the media, has dealt a huge setback to the party’s efforts at rapprochement.

Senior party functionaries said the leadership does not approve of adverse remarks against anyone, including political rivals, and has issued an advisory to leaders to avoid personal comments. However, some insiders say Gehlot could not have slammed Pilot in public of his own and without the knowledge of the central leadership.

“With the chief minister’s attack on his former deputy today, all possibilities of rapprochement seem to have come to an end. It is quite unfortunate that despite the best efforts put in by the party leadership to make things work, matters have come to such a passe,” said a senior Congress leader.

Also Read
Who is Zakir Naik and why has his presence at FIFA World Cup in Qatar sparked a controversy?
NPAs rose by 365 per cent under Modi govt: Congress slams Centre over “unbridled powers” to PSU banks
Boneless man: Meet superhuman Jaspreet Singh Kalra aka Rubber Man of India
Gujarat Elections 2022: Deadline for withdrawal of nominations ends, 1,621 candidates in fray

Another leader said that with Pilot’s supporters continuing to stay in a hotel under the BJP’s watch and the bitter internal factionalism out in the open, hopes of the rebel leader’s return have dimmed. The Congress is, meanwhile, keeping an eye on the outcome of Rajasthan High Court hearing on the petition of rebel MLAs’ challenging the Assembly Speaker’s disqualification notices.

Senior leaders said the result of the court hearing and the dissidents’ next moves would be factored to formulate the party’s future strategy. AICC sources added that Chief Minister Gehlot would soon convene a session of the state assembly to corner the rebels and prove his majority.

No date for the assembly session has been fixed yet.

The Congress has claimed the support of 109 MLAs in the 200-member House and Gehlot has said that he has the majority. The chief minister on Monday called Sachin Pilot ‘useless’ using Hindi word ‘nikamma’ in a no-holds-barred attack on his former deputy with whom he has been locked in a power tussle since December 2018 when the party came to power in Rajasthan.

Referring to the dissident leader’s tenure as the Pradesh Congress Committee president, Gehlot claimed nobody had raised questions on his functioning for the sake of the party even when they knew he was not delivering. “We knew he is ‘nikamma’ (useless), he is ‘nakara’ (idle) and not doing any work,” the chief minister told reporters, in uncharacteristic acerbic remarks against Pilot.