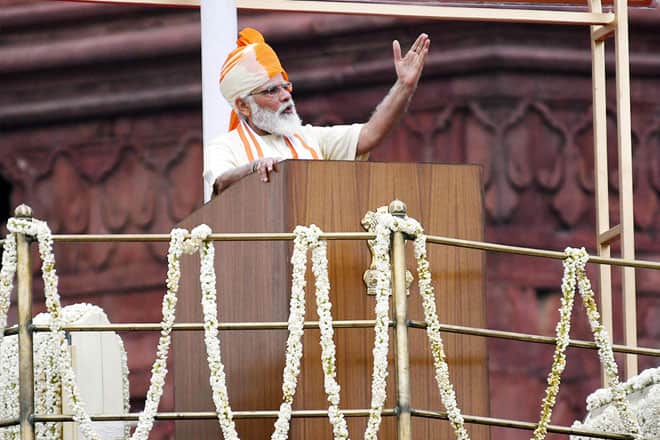 Announcing big plans for Ladakh, he said, "Just like Sikkim has made its mark as an organic state, efforts are being made to make Ladakh a carbon-neutral region."

Dressed in his customary ‘kurta pyjama’ and safa, PM Modi in his nearly 90-minute address, dwelt at length on his ‘Aatmanirbhar Bharat’ campaign as he gave a call for reducing imports and pushing exports of finished products in place of raw material. He said that the country will have to move forward with the mantra of ‘Make in India’ as well as ‘Make for World’. The Prime Minister also paid tributes to freedom fighters and security forces while also remembering Aurobindo Ghose, a freedom fighter and spiritual philosopher whose birth anniversary falls today.

“Aatmanirbhar Bharat is no longer merely a word but has become a mantra and captured people’s imagination,” he said while addressing the nation from the ramparts of the Red Fort after unfurling the Tricolour on the occasion of India’s 74th Independence Day. He said many concerns are raised about it and acknowledged the challenges ahead, but asserted that there are “crores of solutions” offered by the country’s citizens to “lakhs of challenges”.

In the midst of the COVID-19 pandemic, he said, 130 crore Indians have pledged to build an ‘Atma Nirbhar Bharat’.

The Prime Minister said the country received record foreign direct investments during the last fiscal and the FDI growth was recorded at 18%. He said even during the coronavirus pandemic, big global companies are looking towards India. He then reiterated the ‘Vocal for Local’ call and said that India should strive for meeting the needs of the world as well. He wondered how long the country would continue to export raw materials and import finished products. He said India has vast natural resources and the need of the hour is value addition.

World is witnessing the results of reforms which we are unveiling one after another; last year FDI in India broke all records with an 18% increase

Now along with #MakeInIndia, we have to move forward with mantra of #MakeForWorld also: PM @narendramodi#AatmaNirbharBharat pic.twitter.com/5MG8qYkPVy

“The mindset of free India should be ‘vocal for local’. We should appreciate our local products, if we don’t do this then our products will not get the opportunity to do better and will not get encouraged,” PM Modi said. “Aatmanirbhar Bharat does not mean only reducing dependence on imports, but strengthening India’s capacity, creativity and skills,” he said.

“Now we have to move ahead with the mantra of ‘make for the world’ along with Make-in-India,” he said.

He said there is a need to give a new direction to the overall infrastructure development of the country to move India towards modernity at a fast pace. He said the National Infrastructure Pipeline Project will enable this and the country is moving towards spending more than Rs 100 lakh crore on this. 7,000 projects of different sectors have been identified to bring a new revolution in infrastructure.

He emphasised on the need to remove silos saying that the entire country has to move towards multi-modal connectivity infrastructure. He said the Vocal for Local, Re-Skill and Up-Skill campaigns will raise the standard of living of people below the poverty line.

Underlining that many areas of the country have lagged behind in terms of development, he said that by choosing more than 110 such aspirational districts, special efforts are being made there so that people get better education, better health facilities, and better employment opportunities. He said 7 crore poor families were given free gas cylinders, more than 80 crore people were provided free food grains, and about Rs 90,000 crores were directly transferred to bank accounts.

The Prime Minister also said that a special campaign with a holistic approach is also being worked out to reduce pollution in 100 selected cities of the country. He said India is fully committed to the preservation and promotion of its biodiversity. In the recent past, the tiger population has increased at a rapid pace in the country.

Modi said a project for safeguarding Asiatic lions is also going to start in the country soon. He said Project Dolphin is also going to begin for protection of dolphins both in rivers and seas.

The Prime Minister also sought to deliver a warning to India’s hostile neighbours saying the armed forces have given a befitting reply to those who challenged the country’s sovereignty “from LoC to LAC” in their own language. Prime Minister said India is dealing effectively with both terrorism and expansionism. In a reference to the border row with China in eastern Ladakh, Modi said: “Respect for India’s sovereignty is supreme for us and the world has seen in Ladakh what our brave jawans can do to maintain this resolve. I salute all those brave soldiers from the Red Fort.”

“From LoC to LAC, anyone who casts an eye on the sovereignty of the country, the armed forces of the country have responded to them in the same language,” Modi said.

The Prime Minister said one-fourth of the world’s population lives in South Asia and several possibilities can be created with cooperation and participation. He said all leaders of the countries of the region have an important responsibility towards the development and progress of this population. He said ASEAN countries, which are also India’s maritime neighbors, also hold very special importance. He said that as much as India’s efforts are for peace and harmony, India is committed to its security and strengthening the army. He said India is working towards self-sufficiency in defence production.

The Prime Minister also made a host of new announcements, including the launch of a National Digital Health Mission under which health IDs will be given to everyone. He said that the mission will revolutionise the country’s health sector.

Every Indian will get a health ID which will be a repository of all health related information of a person: PM @narendramodi#AatmaNirbharBharat #IndependenceDay #IndiaIndependenceDay pic.twitter.com/iQIpSx2bd9

Under the mission, he said, every Indian would receive a unique health identity card that will have information related to their medical history.

Digital India key to self reliance

Elections in Jammu and Kashmir soon

Modi also touched upon the much-anticipated issue of vaccine for COVID-19 and said three vaccines are in various phases of trials in the country. He said that a roadmap is ready to innoculate all citizens in the shortest possible time with their mass production after scientists give a green signal. Hailing ‘corona warriors’, including doctors, nurses, paramedical staff and sanitation workers who have been continuously fighting the COVID-19 pandemic, he said the country will achieve victory over coronavirus with the resolve of its over 130 crore citizens.

PM Modi said the Jal Jeevan Mission was announced from the Red Fort last year and now, more than one lakh houses are getting water connection every day. He further said that education has a great importance in building self-reliant India. Keeping this in mind, Modi said, a new National Education Policy was brought.

He said NCC is being expanded in border areas and special training will be provided to about one lakh new NCC cadets. He then stressed that women empowerment has a huge role to play in Atma Nirbhar bharat. He informed that of the 40 crore Jan Dhan accounts opened in the country, about 22 crore accounts belong to women. He said that in April, May and June this year, about Rs 30,000 crore have been directly transferred to the accounts of women.

Minimum age of marriage for daughters to be reconsidered

PM Narendra Modi announced that the government has set up a committee to reconsider and determine the right age of marriage for daughters. “We will take appropriate decision after the committee submits its report,” he said. “Today, nation is determined to provide equal opportunities of self-employment and employment to them. Today women are working in coal mines, our daughters are touching the sky while flying fighter plane,” he added.

On Ladakh, he said that the government fulfilled a long standing demand of people by making Ladakh a Union Territory last year. He said Ladakh is moving forward today to touch new heights of development. He said just as Sikkim has made its mark as an organic State, efforts are being made to make Ladakh a carbon neutral region.