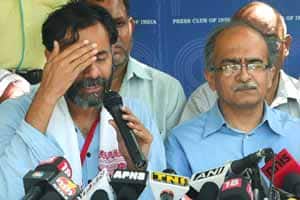 Yogendra Yadav says trying to bring changes in Aam Aadmi Party (AAP) from within was not possible under Arvind Kejriwal. (Express photo by Praveen Khanna)

The decision to sack them from the party was taken by the national disciplinary committee which said as it was not satisfied with the response it got to the show-cause notice.

“The party’s national disciplinary committee has taken a decision to expel Prashant Bhusan, Yogendra Yadav, Anand Kumar and Ajit Jha. They were expelled for gross indiscipline, anti-party activities and violation of code of conduct of the party,” said party spokesperson Deepak Bajpai.

The rebels were given show-cause notice on April 17 to explain the reason for organising ‘Swaraj Samwad’.

Bhushan was charged with working for party’s defeat in the Delhi assembly polls. He was also charged with supporting AWAM, a break away group of the party.

Three of them responded to the notice except Jha.

In their response to the notice, the rebels today accused party chief Arvind Kejriwal of “gross violation” of its constitution and attacked two members of its disciplinary panel for allegedly doing a “planted” story and accepting donations from dubious firms.

Responding to show-cause notices issued by AAP’s National Disciplinary Committee (NDC), Bhushan and Yadav questioned its locus standi for seeking their reply, saying the panel was formed after the “illegal” and “unconstitutional” meeting of the party’s National Council on March 28.

AAP said in a statement,”National Disciplinary Committee met on April 20 at VP House to decide on the complaints against Yogendra Yadav, Prashant Bhushan, Anand Kumar and Ajit Jha.

“On the request of the respondents, the Committee had earlier extended the deadline for submitting their explanations by one day, that is, to 3 PM on April 20.Â

“However, the committee received the responses of Yadav, Bhushan and Kumar while Jha failed to furnish his response within the prescribed time.”

The Committee carefully considered responses furnished by Yadav, Bhushan and Kumar and found them “unsatisfactory”, the statement said.

The party said that the rebels indulged in anti-party activities.

“The Committee reached the unanimous conclusion that Yogendra Yadav, Prashant Bhushan and Anand Kumar had indulged in gross indiscipline and anti-party activities.

“They have violated the Code of Conduct detailed in Article VI A (a) of Party’s Constitution. The Committee is of the view that Ajit Jha failed to furnish his response in stipulated time despite sufficient time to his disposal.

“After examining the evidence put before it, the Committee is of unanimous view that Ajit Jha is also guilty of gross indiscipline and indulging into anti-party activities.

“The Committee, therefore, has decided to expel all the four members from the party,” said the party statement.

Bhushan and Yadav were removed from AAP’s Political Affairs Committee (PAC) on March 4.

Both the camps–one headed by Kejriwal and second by the rebel duo– resorted to talks, but the negotiations failed after which Bhushan, Yadav, Anand Kumar and Ajit Jha were removed from National Executive, AAP’s highest decision-making body.

The rebel leaders had then organised Swaraj Samvad convention on April 17. Falling short of declaring a new political outfit, the rebel camp announced of starting of Swaraj Abhiyan across the country.

Bhushan and Yadav were one of the founder leaders of the AAP.

The activist-lawyer had raised several anti-corruption issues and was a key-aide of Kejriwal since its the Anna movement while Yadav went to become party’s chief spokesperson and had chalked out its policy on various issues. Meanwhile, reacting to the AAP’s decision, Anand Kumar said that the party is reducing into a “supremo worshipping” outfit.

“I feel disappointed for the lack of courage and incapacity to face the truth among the top leaders of the AAP.

“Their opportunism for power is rapidly reducing AAP into a supremo worshipping outfit which may become part of the routine politics,” he said.