Staring at an imminent expulsion from the party, Aam Aadmi Party (AAP) rebel Yogendra Yadav today lashed out at the party… 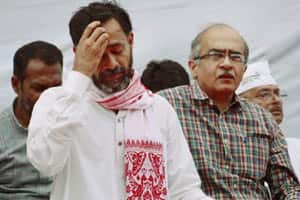 Staring at an imminent expulsion from the party, Aam Aadmi Party (AAP) rebel Yogendra Yadav today lashed out at the party on social media for the show cause notice served on him, terming it as a “joke”.

He also questioned how the media knew the details of the show cause notice before he received it and accused members of the disciplinary committee of “leaking” it.

Yadav wondered as to how the national disciplinary committee took the step without keeping its Chairman Dinesh Waghela in the loop.

He claimed that in a telephonic conversation Waghela, who was “not in Delhi”, had told him that the panel is yet to take up the matter.

“Last evening I had spoked to Mr Waghela, the Chair of Disciplinary Committee. He said he was not in Delhi and had no idea of a possible show cause notice to us except from TV news! As yet, nothing has been referred to him, he said,” Yadav said in a social media post.

Yadav said that Wagehla had promised to look into this “violation of elementary principle of justice”.

He also sought to underline the irony of being served the notice for “leaking” sensitive information to the media, saying that he was apprised about the notice by the media itself.

“By 10 PM the media already knew the contents of all the four letters. Could anyone other than a committee member have leaked it?”.

“By 8 PM media told us that the notice has finally been issued and was being hand delivered. I did not believe it, till we learnt that Prof Anand Kumar’s notice was delivered at his home. Who is keeping the media informed at every stage, I wonder”, Yadav said. Inching closer to the final swoop on dissidents, AAP yesterday served show-cause notices to four senior leaders Yadav, Prashant Bhushan, Anand Kumar and Ajit Jha, who were earlier expelled from the party echelons.

Yadav also heaped scorn on the other members of the committee, including Ashish Khetan and Pankaj Gupta, asking “ever heard of complainants and witnesses themselves becoming judges?”.

“The Committee that has served the notice and will decide the matter includes Shri Pankaj Gupta who had signed a written public statement accusing Prashant Bhushan and me of anti-party activities, the charge he is going to investigate now.

“The Committee also includes Shri Ashish Khaitan who had last month made derogatory remarks against Prashant Bhushan and his family (which he had to apologise for and delete) and was the key source of ‘evidence’ of Prashant Bhushan’s anti-party activities during Delhi elections. He has liberally cursed both of us on TV,” he charged.

Yadav demanded that the members recuse themselves from examining their case and the party reviews the show-cause notice. “Will the committee look into its own leaks before it sits down to examine someone else’s? Or will the joke continue? Or should I call it a farce?”.