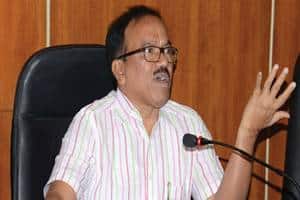 "We have already started the process of creating infrastructure for IFFI. It would be created through PPP mode," Parsekar said in the state Assembly.(PTI)

Goa Chief Minister Laxmikant Parsekar today dismissed suggestions that Aam Aadmi Party (AAP) has grown as a political force to reckon with in the coastal state, saying it will not fetch any votes in the next year’s Assembly polls.

Parsekar claimed that while the Arvind Kejriwal-led party has been canvassing and holding rallies in Goa in last 2-3 months, people of the state were not impressed with it.
“People of Goa are very mature. They don’t get so easily impressed by rallies and banners. I can tell you that the AAP will not fetch any vote in the next election,” the BJP Chief Minister said after meeting Home Minister Rajnath Singh here.
Parsekar, however, said he does not “underestimate nor overestimate” AAP and “all are welcome as it is a democracy”.
“But I can tell you that people of Goa don’t move with waves. They test and verify before lending their support,” he said.
The AAP, meanwhile, today said it was ready to face election in Goa any time and that people of the state were “tired” of the BJP government.
Elections to the 40-member Goa Legislative Assembly are due in March next year.
“People are so sick and tired of this BJP government. People can demand an early election as well,” AAP leader Ashish Khetan said.