Swine flu deaths continued unabated as 51 more people died of the virus raising the toll to 1370 while the number of affected crossed the 25,000 mark today. 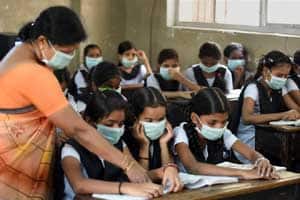 Swine flu deaths continued unabated as 51 more people died of the virus raising the toll to 1370 while the number of affected crossed the 25,000 mark today.

According to data collated by the Union Health Ministry, the highest number of 322 deaths were in Gujarat where 5,521 people have been affected by the deadly virus.

Rajasthan has reported 321 deaths while 5949 people have been affected in the state.

The number of affected people across the country has mounted to 25,190.

With Delhi receiving rains in the past few days, health officials fear the virus may only spread more as high temperatures are deterrent to it.

To prevent the spread of swine flu by migrant workers, health officers of Odisha’s Ganjam district will keep track of their return, mostly from Gujarat.

In Maharashtra, 10 people died today raising the toll to 211 while that of those affected was 2,504 followed by Madhya Pradesh 193 deaths and 1,461 affected.

Delhi, which has reported 10 deaths, witnessed a rise in the number of persons affected by it as the figure reached 3,438.

In Kashmir, the death toll stands at 11. Kerala has witnessed nine deaths while in Haryana, 27 people have died due to the swine flu and in neighbouring Punjab 47.

In Uttar Pradesh, the disease has claimed the lives of 16 people and in Andhra Pradesh, 15 people have died due to swine flu.