With the French Defence Minister having made his government’s best offer, price negotiations with France for 36 Rafale fighters are in their end stages. Earlier this month, the Chief of the Indian Air Force (IAF), Air Chief Marshal Arup Raha, flew in India’s indigenously developed Light Combat Aircraft, Tejas 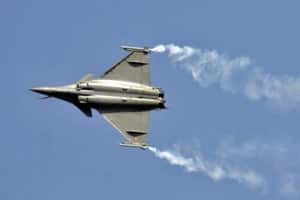 A "working team" from France is already in town with their own translators are going through the contract, running into several thousand pages, with their Indian counterparts. (Express Photo)

With the French Defence Minister having made his government’s best offer, price negotiations with France for 36 Rafale fighters are in their end stages. Earlier this month, the Chief of the Indian Air Force (IAF), Air Chief Marshal Arup Raha, flew in India’s indigenously developed Light Combat Aircraft, Tejas. This was meant to showcase the IAF’s faith in the fighter produced by Hindustan Aeronautics Limited (HAL), which is yet to earn the Final Operational Clearance (FOC). An order for 40 Tejases has been placed by the IAF and the first three fighters are planned to be inducted this year.

But the signing of the Rafale deal and induction of Tejas fighters will not reverse the poor state of the IAF, which has been public knowledge for a few years now. To counter a “two-front collusive threat”, the IAF wants 45 fighter squadrons but has been sanctioned 42 by the government. In March, the Vice Chief of the IAF lamented that they had only 33 squadrons, which were inadequate to fulfill their designated role.

How does the IAF plan to make up for the existing shortfall and the forthcoming reductions?
First up is the Tejas. An order for 40 aircraft has been placed with HAL, 20 of which are projected to be in service by mid-2018. By mid-2020, the full complement will be in service and, by then, a HAL official said, possibly more in hope than out of conviction, “the FOC will have come”.

With Defence Minister Manohar Parrikar throwing his weight behind the Tejas, Ministry sources have confirmed that an order for 80 Tejas-Mk1A — an improved version of the aircraft — will be placed with HAL. The prototype of Tejas-Mk1A will be ready by 2018, and HAL hopes to have the Initial Operation Clearance (IOC) by 2020. It can then be put into production on the Tejas assembly line, which would be free.
The workhorse of the IAF will, however, continue to be the Russian Sukhoi MKI. The HAL plant at Nashik produces 12 Sukhois every year, and the IAF expects to have its full complement of 272 Sukhois by 2020. As Parrikar informed Parliament, the serviceability state of Sukhois in service is a worrying 53%.

Assuming the Rafale deal is signed shortly, the 36 fighters will be with the IAF only by 2023. Having only 36 fighters of one type makes little sense logistically or operationally. There was talk of a follow-up deal for more Rafales which could be assembled in India, but this is by no means a certainty.

If — and this is a big if — all goes to plan, the IAF will be able to maintain its current squadron levels. To make up for the shortfall, Parrikar has indicated another imported fighter will be needed. Three are believed to be in contention: US F-16 and F-18, and the Swedish Gripen. Lockheed Martin has proposed shifting the F-16 assembly line to India but it is a previous generation fighter. The F-18 proposal doesn’t include an assembly line in India, and the IAF is not too enamoured of it. Sweden has made the right noises about transfer of technology and production of Gripen under ‘Make in India’; a formal proposal is expected next month.

Meanwhile, the Russians have been pushing the Fifth Generation Fighter Aircraft (FGFA), which was supposed to be jointly developed by Russia and India. India’s lack of interest was apparent from its failure to pay as per schedule. Russia has already developed the fighter with stealth capabilities, and wants India to pay $ 3.7 billion so that HAL can start producing them in India after its Sukhoi assembly line at Nashik is free.

The FGFA, however, is needed to replace the legacy fighters which will be in service till 2030. By then, should the Defence Ministry commit strongly to the project, the Aeronautical Development Agency’s (ADA’s) Advanced Medium Combat Aircraft (AMCA) could be poised to enter service. The project needs funding commitment from the government next year, and it hopes to fly the first aircraft in eight years.

Another four years will be needed for the IOC. But all this is still in the planning stage. The reality is that the Rafale deal is yet to be signed while the Tejas-Mk1A is still on paper. The rest, from AMCA to FGFA to another foreign fighter, are also in the realm of the future. The IAF, meanwhile, remains at dangerously low squadron strength, with no clarity about its future.