Union Health Minister J P Nadda today said 22 new AIIMS are coming up across the country and admitted that there was a shortage of skilled human resource in the health sector. 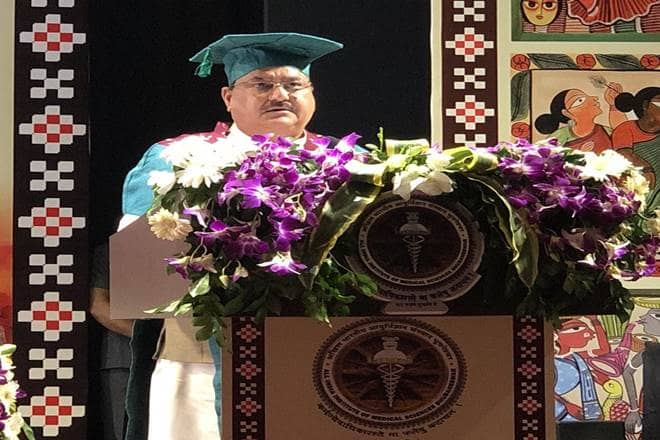 Union Health Minister J P Nadda today said 22 new AIIMS are coming up across the country and admitted that there was a shortage of skilled human resource in the health sector. He also said ensuring the highest standards of medical education was a top priority for the government.

“Twenty-two new AIIMS are coming up across the country under the Pradhan Mantri Swasthya Surakhya Yojana to reduce regional imbalance in the healthcare and tertiary fields,” Nadda said while addressing the first convocation of the All India Institute of Medical Sciences (AIIMS), Bhubaneswar.

Admitting that there was a shortage of skilled human resources in the health sector at all levels, the health minister said the Centre has planned for a rapid expansion of medical education. Nadda said as medical education forms the apex of the healthcare pyramid, it is the quality of graduating doctors and specialists that will determine the quality of services in the country for generations to come. Many initiatives such as increasing the retirement age of doctors to 65 years, setting up of more medical and nursing schools, multi-skilling of doctors to overcome the shortage of specialists, have been taken by the Centre to improve medical education, he said. To ensure better standards of medical education, the Centre has undertaken suitable amendments in the Graduate Medical Education Regulations and the Post Graduate Medical Education Regulations for making common counselling for admission in medical colleges mandatory, Nadda said.

“Twenty-four new medical colleges have been announced in this year’s budget. Twenty state cancer institutes and 50 tertiary cancer care centres are also being set up,” he said. The health minister said the AIIMS will soon introduce campus recruitment in order to retain students passing out of the institutes. He said AIIMS pass-outs are acquainted with the culture of the institute. The attempt is aimed at retaining the best brains of AIIMs in the institute, Nadda said.

“Dear students, young doctors and faculty, I invite you all to join my ministry in further building upon this commitment of our prime minister to upgrade the healthcare access of the common man, thus taking the well being of our nation to greater heights,” the Union minister said. Noting that it is a great challenge to produce high quality healthcare providers at all levels, Nadda said “We need the teachers and academicians to develop such human resources in health. In this regard, the country has a lot of expectation from all of you.”

No patient should be denied treatment on account of being poor or belonging to lower strata of society, he said, adding that the Centre has recently launched the Ayushman Bharat Pradhan Mantri Jan Aarogya Abhiyan’ programme to provide assured universal healthcare to over 50 crore people from the vulnerable sections. “My message to the graduating students on this occasion is that you should always keep in mind that medicine is not just a profession, but a vocation. Never forget your humanity, or that of your patients…,” he said. Petroleum and Natural Gas Minister Dharmendra Pradhan, addressing the gathering, urged the health minister to install a statute of former prime minister Atal Bihari Vajpayee in the premises of AIIMS, Bhubaneswar, to which Nadda readily obliged.

Odisha Governor Ganeshi Lal and Odisha’s Health and Family Welfare Minister Pratap Jena also addressed the gathering. Vice-President M Venkaiah Naidu and Nadda laid the foundation stones for two buildings at the AIIMS, Bhubaneswar, campus. One 560-bedded night shelter building (Rs 26 crore), funded by the National Aluminium Company Limited (Nalco), will be constructed in the AIIMS premises for the requirement of patients and their attendants. Similarly, a foundation stone was also laid for construction of a Burns Treatment Centre at the cost of Rs 14.82 crore funded by the NTPC. It will have comprehensive treatment for burns patients.