14 civilians killed by security forces in Nagaland; 1 soldier killed as rioting breaks out

Rioting spilled over into Sunday afternoon when angry mobs vandalised the offices of the Konyak Union and an Assam Rifles camp in the area, setting fire to parts of the camp 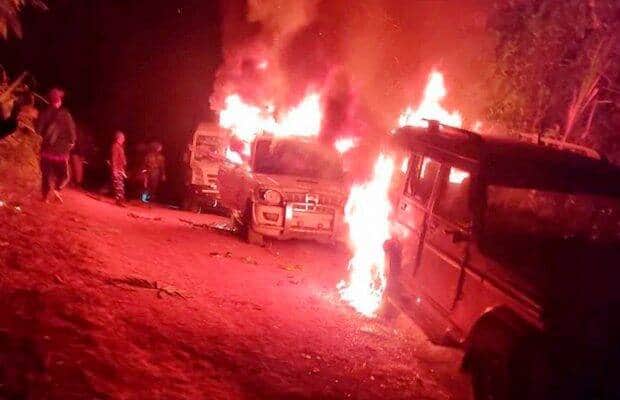 The Nagaland government through a notification has banned mobile, internet and data services as well as bulk SMS in the district to curb "circulation of inflammatory video's, pictures or text". (PTI photo)

Security forces opened fire on civilians killing 14 and injuring 11 more in Nagaland’s Mon district in three consecutive incidents of firing the first of which was possibly a case of mistaken identity, police said on Sunday. One soldier also died in rioting which followed. The first firing which killed six civilians, occurred when army personnel mistook coal mine workers returning home in a pick-up van singing songs on Saturday evening, to be insurgents belonging to the Yung Aung faction of the banned outfit NSCN (K), about whose movements they had been tipped off.

As workers failed to reach their homes, local youth and villagers went in search of them and surrounded the army vehicles. In the ensuing melee one soldier was killed and army vehicles burnt down. Soldiers who fired in self-defence killed another seven civilians, said police officials. Rioting spilled over into Sunday afternoon when angry mobs vandalised the offices of the Konyak Union and an Assam Rifles camp in the area, setting fire to parts of the camp.

At least one more person was killed and another two injured, as security forces fired back at attackers. The angry mob has been demanding immediate action against security force personnel involved in the firing. The Nagaland government through a notification has banned mobile, internet and data services as well as bulk SMS in the district to curb “circulation of inflammatory video’s, pictures or text”.

Videos of mob vandalizing the Konyak Union office in Mon and the Assam Rifles camp are however circulating on social media despite the ban on internet services in the district. Chief Minister Neiphiu Rio who rushed back from Delhi on Sunday will visit the affected district on Monday.

Police said that the post-mortem of those killed is being conducted in Mon and feared that the number of fatalities may increase as at least two of those injured were critical and had to be evacuated to hospitals in Assam while the rest were being treated in Nagaland.

Ordering a Court of Inquiry into the incident, Army said one of its personnel was killed and several others were seriously injured. It said that the incident and its aftermath is “deeply regretted” and the unfortunate loss of lives is being investigated at the highest level.

The state government has constituted a five-member Special Investigation Team (SIT) headed by IGP Nagaland, officials said. PRO Defence (Kohima) Lt Col Sumit K Sharma said “Based on credible intelligence of likely movement of insurgents, a specific operation was planned to be conducted in the area of Tiru, Mon District, Nagaland. The incident and its aftermath is deeply regretted.”

Chief Minister Neiphiu Rio promised a high-level probe into the incident and appealed to all sections of the society to maintain peace. Mon shares a porous international border with Myanmar, where the Yung Aung faction of NSCN (K) is based. Official sources said Defence Minister Rajnath Singh and Army Chief Gen M M Naravane have been briefed about the incident.

“SIT shall investigate the incident from all angles while a court of inquiry has been instituted against the army personnel involved,” Jagdish Mukhi, Governor of Assam and Nagaland said in a statement, while appealing for peace. Rio tweeted “the unfortunate incident leading to killing of civilians at Oting, Mon, is highly condemnable. Condolences to the bereaved families & speedy recovery of those injured. High level SIT will investigate & justice delivered as per the law of the land. Appeal for peace from all sections.”

Home Minister Amit Shah too tweeted his anguish and expressed “deepest condolences to the families of those who have lost their lives. A high-level SIT constituted by the State govt will thoroughly probe this incident to ensure justice to the bereaved families.”

Reacting to the incident, Gandhi however pointed out in a post on social media “This is heart wrenching. GOI must give a real reply. What exactly is the home ministry doing when neither civilians nor security personnel are safe in our own land?” West Bengal Chief Minister Mamata Banerjee also demanded a thorough investigation and described it as a “worrisome news”.

In protest against the incident, the Eastern Nagaland People’s Organisaiton (ENPO) urged the six tribes of the region to withdraw participation from the ongoing Hornbill Festival, which is the state’s biggest tourism extravaganza. “While expressing deep sorrow and sadness over the indiscriminate firing by Indian security force where more than 10 daily wage laborers from Oting village were blatantly killed, the ENPO vehemently condemn the barbaric act of the security force,” a release issued the organisation said. The ENPO asked the six tribes to hoist black flags in their respective Morungs at Hornbill Festival venue Naga Heritage Village in Kisama near the state capital against the incident. “It has to be understood by all concerned that this order/move is not against the State Govt., but to show resentment against the security forces who have committed this heinous crime, and to show solidarity of the 6 tribes,” it said. Abu Mehta, advisor to the chief minister, said that two minute’s silence will be observed and prayers will be held at Kisama for those killed in the incident.