Kerala Chief Minister Pinarayi Vijayan has said his government will not act with vengeance in dealing with the corruption charges against the previous Oommen Chandy government. 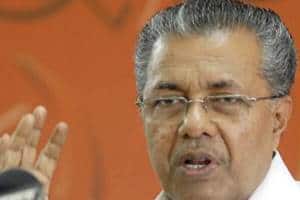 Kerala Chief Minister Pinarayi Vijayan has said his government will not act with vengeance in dealing with the corruption charges against the previous Oommen Chandy government.

Addressing reporters here on Thursday the chief minister’s first full-fledged media interaction since he was sworn-in on May 25 Vijayan said: “Law will take its own course and nothing will be done with vengeance.”
In the run-up to the Assembly election in the state, the Left Democratic Front (LDF) had promised that if voted to power it will take corruption allegations against the Congress-led Oommen Chandy government to their logical conclusion.
The Chief Minister also said the LDF will strive to fulfil the promises made during the election.
“The people’s mandate will be respected and we will govern judiciously,” Vijayan said.
Referring to the state’s finances, the Chief Minister said that they are in a precarious condition and all efforts will be made to improve the situation.
Regarding the merger of the State Bank of Travancore with the State Bank of India, the Chief Minister said the state government is working to set up a bank which can be the state’s own institution.
“The State Bank of Travancore is considered as Kerala’s own bank. But it is being merged with the State Bank of India.
We are working to set up another bank which will be Kerala’s own bank,” Vijayan said, adding: “We will remove the three tiers of the cooperative banks and create one single entity.”
On the Mullaperiyar dam he said that the safety of the dam should be assessed. “We should bring a team of international experts to assess its safety,” Vijayan said.
Referring to his reported statement last month that the dam is safe, the Chief Minister said all that be meant was there should be a new dam in place of the Mullaperiyar dam.
Vijayan, who also holds the Home portfolio, said that all efforts will be made to make the police more people-friendly.
Vijayan further stated that once the Assembly meets, his government will decide on the major projects in the state.
To a question on veteran CPI-M leader V.S. Achuthanandan, the Chief Minister said that no decision has been taken on whether any position will be offered to the nonagenarian leader.