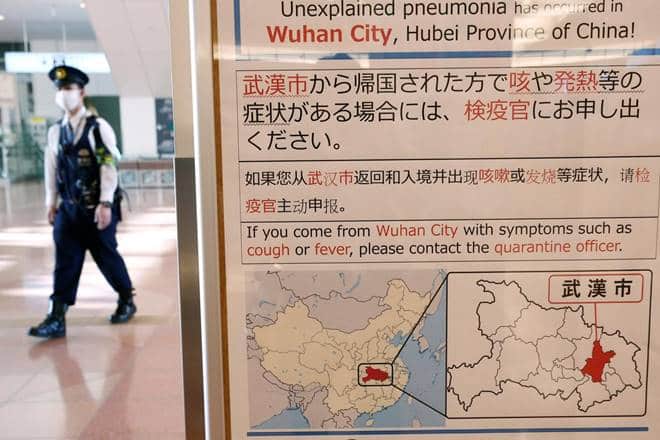 According to the National Health Commission, 26 people have died so far with over 880 confirmed cases being treated mostly in Hubei province. (Reuters)

Battling the fast-spreading coronavirus, China on Friday said that it is building a 1,000-bed hospital for patients infected with the deadly virus that has claimed 26 lives so far with confirmed cases rising sharply to over 880, prompting authorities to shut down 13 cities during the country’s most important holiday. Dampening the celebrations of the Lunar New Year, China, in an unprecedented move, has shut down transportation in at least 13 cities — Wuhan and 12 of its neighbours — in central China’s Hubei province to contain the coronavirus. According to the National Health Commission, 26 people have died so far with over 880 confirmed cases being treated mostly in Hubei province. Twenty nine provinces have reported the cases. China’s biggest city Shanghai raised the emergency response of public health safety to level 1, the highest, following Beijing, and Hubei, Hunan, Zhejiang, Anhui, and Guangdong provinces as more cases were reported.

Beijing so far reported 34 confirmed cases of coronavirus infection, official media reported. The Chinese disease prevention authority on Friday released pictures and information of the first Wuhan Coronavirus that Chinese experts had discovered. The Wuhan local government is rushing to build a 1,000-bedded hospital in the outskirts of Wuhan to treat coronavirus patients. Dozens of excavators were feverishly working at the site where the hospital will be built on the 25000 sq metres just about 10 days’ time. It will be put into use by February 3, state-run Xinhua news agency reported. Workers are being paid 1,200 yuan (USD 173) per day, three times their usual wage, to accelerate the construction. The hospital will be modelled on the one built in Beijing for the treatment and control of SARS or Severe Acute Respiratory Syndrome, that spread rapidly on the Chinese mainland in 2003, killing over 800 people.

During that time Beijing had built the Xiaotangshan Hospital, a temporary medical centre in the northern suburb of the city. China has also deployed its military medics to help civilian doctors. As the unknown virus wreaking havoc, Chinese and American researchers are working together to develop a vaccine against the deadly new strain of coronavirus, Hong Kong based South China Morning Post reported. The collaboration is taking place amid a growing international debate about whether it came from snakes or bats. At present, there is no cure for the virus which has pneumonia-like symptoms and is contagious among humans.

Also Read
Dim lights may hamper your ability to learn: Study
Have snake phobia? This Indian state records the highest number of snake-bite deaths
Wipro expects to access about 1 lakh doses of COVID vaccine for employees

The World Health Organisation (WHO) on Thursday stopped short of declaring the virus a global public health emergency, despite China’s climbing death toll. The virus has spread to Hong Kong, Macau, Taiwan, Japan, Singapore, South Korea, Thailand, Vietnam and the United States as of Thursday. Japan on Friday reported a second confirmed case. Wuhan, the city of 11 million people, is where the virus is believed to have first emerged.

The victims’ average age is 73, with 89 being the oldest and 48 youngest. Hubei authorities have suspended operations at local travel agencies and ordered all schools to postpone the start of spring semester classes, said People’s Daily, the official newspaper of the ruling Communist Party of China (CPC). China’s finance ministry on Thursday announced the allocation of one billion yuan (USD 144 million) to be used by Hubei authorities to halt the spread of the illness, the report said. The Indian Embassy in Beijing has cancelled the January 26th Republic Day ceremony citing the coronavirus outbreak in China as well as the decision of the Chinese authorities to cancel public gathering and events. The Wuhan lockdown is a cause of concern for Indian students who are still there. The city and surroundings have about 700 Indian students, majority of them studying medicine.

However, most of the students have apparently left for home for the holidays. As concerns grew over their safety, the Indian embassy on Thursday opened helplines and established contacts with the Chinese officials concerned to ensure food and other supplies to those who remained in the city. In a new disclosure, Chinese officials on Thursday confirmed fresh cases of coronavirus in people who did not even travel to Wuhan recently. The National Health Commission also reported increasing the number of cases with no exposure to Wuhan’s Hunan seafood wholesale market, which is believed to be related to most of the infected cases.

The cases without confirmed exposure to the market have been found overseas. The virus, which a doctor in Wuhan told BBC is spreading at an alarming rate, has dampened the Chinese New Year celebrations beginning Friday. Chinese all over the world formally bid goodbye to the year of the pig on Friday and would welcome the year of rat on Saturday. The Chinese government has given week long holidays. Chinese lunar calendar, years are grouped into a 12-year cycle, with each year is assigned an animal symbol: rat, ox, tiger, rabbit, dragon, snake, horse, sheep, monkey, rooster, dog and pig. In view of the virus scare, several cities, including Beijing, have cancelled special events. The festival is also known as the Spring Festival. Large cultural activities during the spring festival in Beijing such as temple fairs were cancelled to prevent the spread of the virus.