We were one of the first ones to develop tyres as per EVs requirements: Manav Kapur, Steelbird 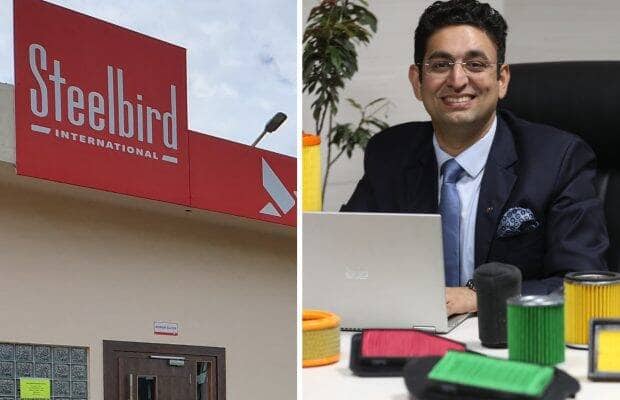 Steelbird International is a reputable name in the automotive component manufacturing industry of the country. The company was founded by Late Tilak Raj Kapur in the year 1964. Steelbird International is a family-owned yet professionally managed group that is currently run by the third generation of the family. They started with automotive filters and gradually ventured into a lot of other products including rubber parts, helmets, plastic components, etc. To understand more about Steelbird International’s business, the impact of Covid on the auto-component manufacturing sector, and the company’s expansion plans, we interact with Manav Kapur, Executive Director of Steelbird Group.

How has been the impact of covid on the auto component manufacturing sector? How has been your journey during the covid period and is the recovery strong enough?

Mr. Kapur says that for the auto component sector, covid has been like a roller coaster ride. When covid first hit India, we got a jerk stop and when things started opening up, we were the first ones to bounce back. Post-covid, since a lot of people transitioned from shared mobility to personal mobility, there was a lot of demand. But, then we had a slowdown due to uncertainties, then we had the chip shortage kicking in, so overall it has been a roller coaster ride for the entire automobile sector as we didn’t know what’s going to happen next.

Steelbird International is a pioneer in the automotive filter space and it consists of 45 per cent of your overall product portfolio. So, what’s the importance of air filters in a car or a bike, and are they beneficial in reducing pollution too?

The primary purpose of automotive air filters is to clear the air for combustion in the international combustion engine. But, indirectly, they are beneficial in reducing pollution. Since air filters filter out the dust particles, they increase the overall efficiency of the engine. Mr. Kapur adds that if in a way if we are able to increase the efficiency of the engine with our product, so we are actually helping the environment by reducing the net utilisation of the fuel. Also, when it comes to cars, beyond air filtration there is a cabin air filter that works as a filter for the car’s air conditioning.

Currently, Steelbird manufactures automotive filters, rubber products, and six range of tyres. In near future, are you planning to manufacture electric vehicle components too as EVs are the future?

Mr. Kapur says that they are already working with a couple of EV startups and supporting them with rubber components. He also adds that Steelbird International was one of the first companies to develop tyres as per EVs requirements. He says, for them, vehicles are more about mobility than what powertrain it has. Mr. Kapur is betting big on EVs. He says they look at it as an opportunity as they will have more OEMs to work with and a different kind of environment to work with altogether.

Steelbird has recently launched a new engine oil for two-wheelers, so how has been the response of the market on your new engine oil?

Manav Kapur says that they have received an amazing response for their new engine oil. He added that due to high demand, they even had a shortage of supplies. Mr. Kapur says that engine oil is a highly consumable product in the market and since Steelbird already had its brand name and network in place, so all in all, it helped the company in achieving the volumes which even they didn’t anticipate.

Mr. Kapur believes that at least for a year or two, we might be hearing a lot about the shortage because all of a sudden, the demand has gone up but the supply couldn’t cope up so quickly. He adds that a lot of people are already working on it and it might take another one year to streamline it. When asked about the impact of the shortage on Steelbird’s production facility, Mr Kapur said that it affects the OEM business which contributes only to a small chunk of their overall business and since they work with a lot of aftermarkets as well, their production hasn’t really got hampered.

Finally, if you want to add anything about Steelbird International’s expansion plans in India as well as globally and do you plan to set up another manufacturing facility?

Talking about the expansion plans of the company, Mr Kapur said that they already have three production facilities in Uttarakhand and two in Greater Noida, U.P. He added that the company is hunting for land to set up another manufacturing facility due to additional organic growth in demand. He revealed that the company is also looking at exports and negotiating with a couple of customers internationally. Mr. Kapur is very positive about setting a good amount of business with some US giants and as soon as that happens, the company will set up a dedicated facility for such customers. The company has recently also applied in Jammu & Kashmir to set up a production facility and they are waiting to hear from the authorities.