Altigreen plans 5 factories in India, eyes the ASEAN market too

Saran says if Altigreen has to manufacture in a specific geography, where transportation and other factors is going to be a challenge, they might decide to reduce or increase the size of the line. 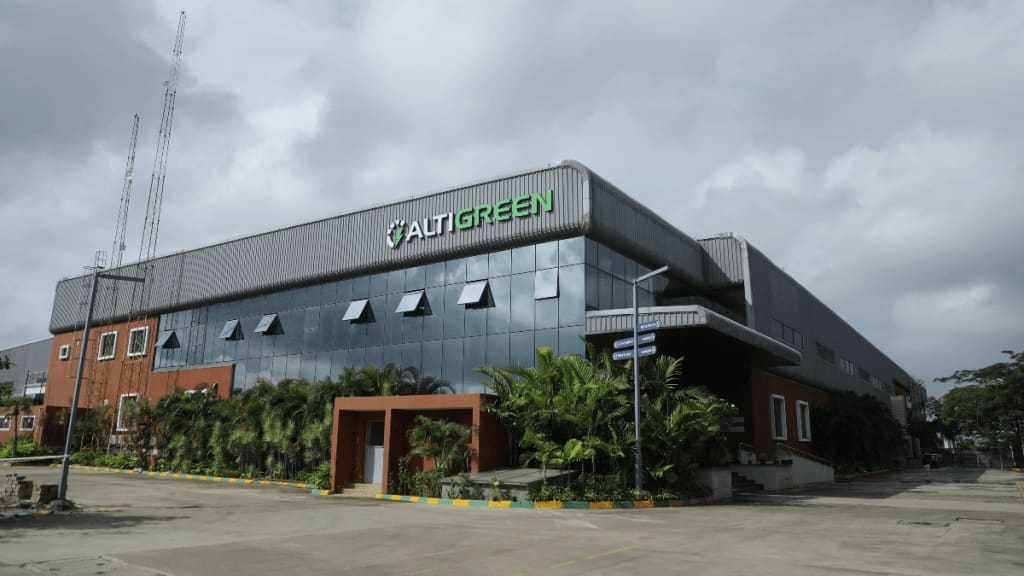 Altigreen has invested around Rs 100 crore towards its new Bengaluru facility, which can manufacture upto 55,000 EVs per annum.

Homegrown electric vehicle manufacturing company Altigreen which recently opened its first manufacturing facility in Bengaluru has plans to have similar facilities across the country. In fact, Dr Amitabh Saran, Founder & CEO, Altigreen tells Express Mobility the company in the future has plans to set up four more factories in India and one in the ASEAN region too.

The EV maker recently moved its production to the new Bengaluru facility which at capacity will be able to produce around 55,000 units per annum or 4,500 units per month. Altigreen has supposedly invested around Rs 100 crore towards the factory, which employs over 600 people.

Saran says the strategy for Altigreen is “not to focus on centralised manufacturing but instead be there where the market is.”

“The reason for creating these micro-factories is to address a certain cluster of states. For example, if you take the Northeast should I have my factory located in West Bengal, Orissa, and then service the Northeast market or should I open someone there,” he said.

Saran says if Altigreen has to manufacture in a specific geography, where transportation and other factors are going to be a challenge, they might decide to reduce or increase the size of the line. Not every factory will have the same capacity, depending on the market it could be less or more. But the factories will not exceed the 55,000-60,000-unit capacity range.

For the export market too, the company has received good interest from several countries, and it is also mulling to set up a manufacturing base in the ASEAN region to meet the domestic country requirements.

“The way we will do this is instead of having three lines, maybe they will have only two lines, but the processes, how and what has to be done at what place what kind of methodologies have to be used, which site is the incoming which site is all that is fixed, that will not change that blueprint,” he adds.

In addition to the neEV electric three-wheeler cargo, Altigreen is also looking to launch a passenger vehicle offering. While the company has started with electric three-wheelers as its first offering, it aims to introduce new products “with more wheels”. It is expected that it will introduce an electric SCV and gradually move towards higher tonnages.

The automotive industry globally is embracing new partnerships like no other segment. Traditional rivals, new-age players, and suppliers are joining hands to withstand the megatrend of CASE (Connected, Autonomous, Shared and Electric) where no one player could do everything all by themselves.

Responding to a query on whether Altigreen will be open to sourcing parts versus its own design from other vendors, Saran says, “If they are able to meet our requirements at a suitable price point, why not?”

But he is cautioned that if there are only a few players manufacturing and supplying motors, it could lead to over-dependence and hurt the industry.

“What happens then if there are only a few people who are making it. There can hold OEMs captive. I want to make sure that the industry has grown to a place you’re not overly dependent, we are not only dependent also have to look at the whole foreign exchange versus India, make in India, and all that how much of that is indigenisation? How much of that is helping in the growth of this industry? We have to look at all those kinds of things.”

In terms of contract manufacturing partnerships, “Maybe at some future point, and I can’t define a date by when once we have everything standardised. We will look at perhaps having a contract manufacturer or the franchisee model. But right now, for the next year or two I don’t see that happening.”

Unlike the internal combustion engine vehicle its electric counterpart heavily relies on software to control the complexity of the product. Right now from integrated sensors in the battery, the BMS to the dashboard or connected app, the EV can be simply defined as Software on wheels.

It comes as a no-brainer that for the electric vehicle to have a differentiator software plays a key part in defining and controlling the performance.

India is known both as an IT hub and a vast talent pool of engineers across domains, but at present, the issue of moonlighting and high attrition is impacting companies alike.

“The challenge of attrition is there, but it is a combination of work, they (engineers) are getting over here, the kind of environment I’ve given to them, I’m not saying that I will pander to their wishes, and hence, they will not leave.”

Saran believes that as long as companies pay as per industry standards, it is important that the employees understand that they are in the right place at the right time. By end-2025 Altigreen aims to expand its team to more than 3,000 people.

Saran further says that software is the product now. “Think about the entire data angle, it is going to be so critical for an EV company to have control and mastery of the data. Because you will use the data for predicting failures, improve the efficiency of the vehicle, improve driving behaviour.”