At the sidelines of the Oben Rorr media test ride event, Express Mobility spoke to Madhumita Agarwal, co-founder and CEO, Oben Electric to know more about the development, sales, and production plans for the company. 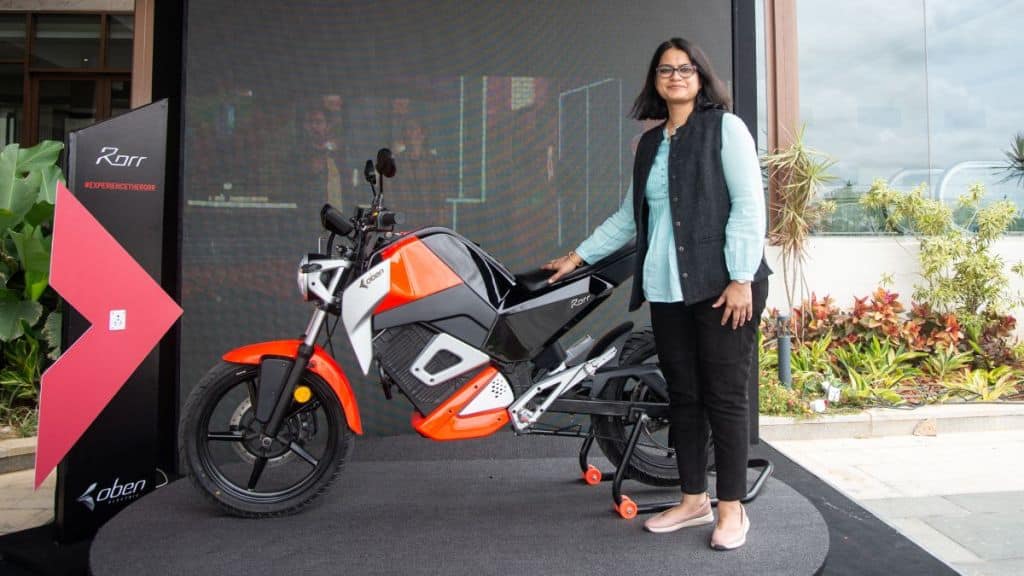 Bangalore is becoming a booming market for electric vehicle and EV component startups, one among them is Oben Electric, which has launched its Rorr electric motorcycle.

Launched in March this year, the Rorr is priced at Rs 1.02 lakh ex-showroom, Delhi. Although bookings are open, the start-up says it is yet to finalise dealers and sales outlets for its first offering. The customer test rides will begin from July 2, not much information was known about the motorcycle, apart from what the website displays, and a few scattered information.

At the sidelines of the media test ride event, Express Mobility spoke to Madhumita Agarwal, co-founder and CEO, Oben Electric to know more about the development, sales, and production plans for the company.

“India is predominantly a motorcycle market. Scooters somehow do not have the same emotional connect when compared to motorcycles, there is a lot of emotion and pride owning a motorcycle,” says Agarwal. Oben’s approach was to first build a product for that market that’s known for motorcycles, then followed by EV tech. She adds, “Our strategy as a young company was to focus on the bigger market.”

The Rorr features a blend of a modern street bike with retro touches such as a round headlamp and short fenders to keep the overall design minimalistic yet appealing to Oben’s target audience — between 18-35-year-old. Agarwal says, “This is the age group when a person is going to college for the first time or getting into his first job and would aspire to ride a motorcycle.”

The e-two-wheeler is built on an in-house designed lightweight chassis and manufactured by frame-makers in the country. The plastics, tyres, and electricals are again procured locally, while components such as the battery cells and magnets are imported from either China or Taiwan. Apart from these two components, everything else, including the battery pack and the BMS is designed by Oben at its Bangalore facility.

The e-motorcycle uses LFP battery tech, which consists of Lithium, Iron, and Phosphate. One of the advantages of the LPF batteries is said to be that the composition is made of naturally-occurring materials. It also has a longer lifespan, are relatively safer, and have better charge and discharge efficiency.

The start-up claims better battery life compared to competitors and offers a 60,000km or a 3-year warranty, however, did not reveal the number of charge cycles it can withstand.

The battery pack is housed in an aluminium casing, which the company says will help keep incidents – in case they occur – contained. The 4.4 kWh battery offers a claimed range of 200km on a full charge and the 10 kW motor – the most powerful motor on an EV as per Oben Electric – helps the motorcycle accelerate from 0–40kph in 3 seconds and go on to a top speed of 100kph, on par with the 150–160cc motorcycles the company targets.

In terms of charging, the start-up claims that Rorr’s battery can be fully charged in 2 hours and the it will offer a built-in charging adapter. This helps charge the battery pack with any 15 Amp power outlet, be it at home, office, or any roadside Dhaba.

Responding to a query on why the company is not looking at Battery Swap as a solution, Agarwal says that the motorcycle’s high-powered battery is heavy compared to smaller swappable batteries and “carrying around a 25 kg battery pack is not advisable. Also, if a connector is in place properly after the swap or if a person drops the battery by mistake, it can lead to accidents.” Hence, keeping safety and convenience in mind, Oben has opted for a quick-charging battery instead.

Since its launch the Rorr e-motorcycle has received around 15,000 bookings from 9 cities alone — Bangalore, Chennai, Hyderabad, Delhi, Ahmedabad, Jaipur, Surat, Mumbai, and Pune. The deliveries are expected to begin after Oben finalises a few parts on the motorcycles as they are still in the prototype stage. The start-up says while the “overall design and functionality will be the same, a few parts such as the body panels may get an upgrade depending on customer feedback.”

The e-motorcycle will be manufactured at Oben’s Bangalore facility which the start-up says has a manufacturing capacity around 3 lakh units a year. However, it aims to take it slow. “The first year we would target around 25,000 units and slowly scale up as demand goes up,” shares Agarwal.

In terms of future products, Oben is already testing multiple lower-powered prototypes and the launch will take place in January next year. The plan is to launch one product every six months. Agarwal says, “So the next product with the prototype which is being tested is going to come in January. “

The EV start-up also plans to develop electric scooters, however, this will be focused on the international market. For India, the target is to be the segment leader in the e-motorcycle category. For future growth, Oben also will be raising more funds soon, “It’s a manufacturing and hardware segment, so it requires investments,” says the CEO. To date, Oben has raised around Rs 16 crore and future funds will be raised in a phased manner.