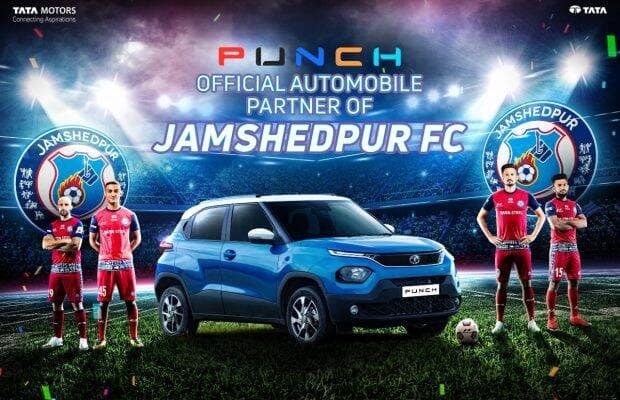 Bombay-based homegrown automotive giant, Tata Motors, has announced that the company has continued its association as Jamshedpur FC’s official automobile partner for the ongoing Indian Super League (ISL) 2021-22 season. This time around, the association will see Jamshedpur FC promote the company’s latest sub-compact SUV, Tata Punch. Tata Motors was a partner with Jamshedpur FC in the club’s debut season (2017-18) in the ISL as well.

Thanks to this association, in the ongoing season of the ISL, Jamshedpur FC’s kit will have the Punch logo on its match jersey sleeves. Moreover, Punch will be visible in-stadia during Jamshedpur FC’s home matches at the GMC Athletic Stadium Bambolim in Goa and will also engage on the football club’s digital platforms. Tata Motors says that they have always had a rich history of associations with various sports properties and brands across the globe and the company was a part of the recently concluded Indian Premier League (IPL) 2021 too.

On continuing the association, Vivek Srivatsa, Head, Marketing Passenger Vehicle Business Unit (PVBU), Tata Motors, said, “We are delighted to continue our association with Jamshedpur FC as the Official Automobile Partner in the upcoming Indian Super League campaign. We are excited to be able to showcase our newly launched SUV, Tata Punch to the passionate football-loving people of Jamshedpur and Jharkhand by forming synergies with one of the elite teams of Indian Football that is Jamshedpur FC. The city of Jamshedpur is the home of Tata Motors and are proud to be associated with the city’s own football club.”

Jamshedpur FC’s Chief Executive Officer, Mukul Choudhari, was delighted to have Tata Motors continue the partnership, as he said, “We had a great partnership in the previous season, and we are glad to scale up efforts to make this association with Tata Motors bigger and better. To have a world-renowned brand like Tata Motors associating with us with the aim to develop football in India is a big motivator and we look forward to ‘Pack a PUNCH’ with their amazing new SUV being promoted in the upcoming season.”