At the unveiling event of the 2022 Hyundai Tucson, Tarun Garg revealed that the idea to bring the long wheelbase version was led by market research. He also confirmed that there are more N Line models coming to the market. 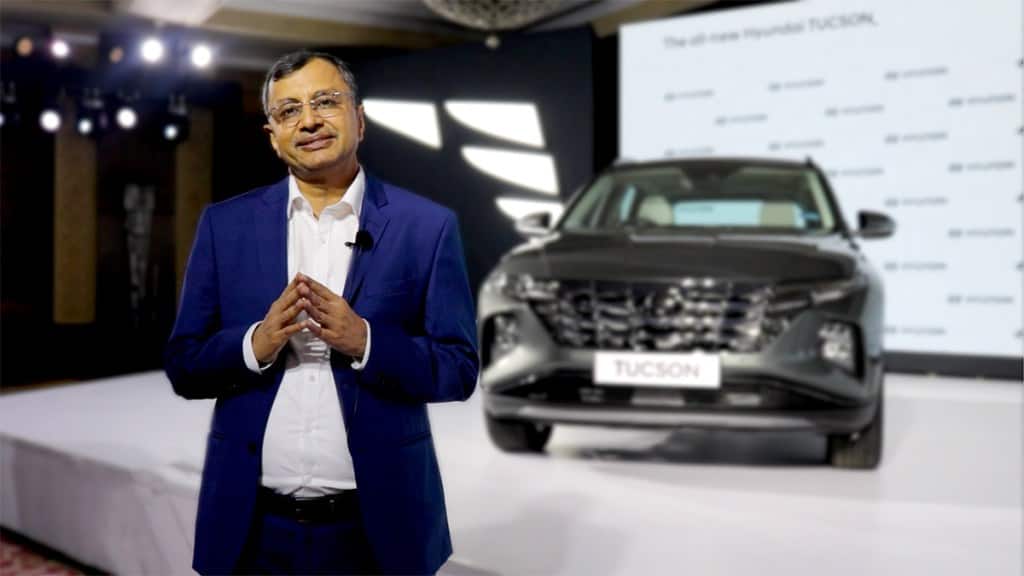 Hyundai Motor India has unveiled the 2022 Tucson which now gets advanced driver assistance system (ADAS). It is the first Hyundai vehicle in India to sport autonomous driving capabilities and also comes with a host of connected features. Booking for the vehicle will open on July 18 and deliveries will begin with the launch of the product in the first week of August. At the unveiling event of this new flagship product from Hyundai, we were able to speak to Tarun Garg, Director – Sales, Marketing and Service, Hyundai Motor India and discuss a few aspects related to their latest offering.

The fourth-generation Hyundai Tucson is based on the company’s Sensuous Sportiness design philosophy and looks rather distinct. It is bolder than the model it replaces and adopts a more European design aesthetic. We had previously seen a similar move from Hyundai when they launched the new i20 back in 2020. We asked Tarun Garg about the response from customers on such global designs and how the customers have been responding. According to him, the company has received a lot of enquiries for the new Tucson since they listed the product on their website. He said, “I’ve received so many emails and messages from prospective buyers asking me about the launch of the new Tucson.”

Just like the Alcazar, the Tucson will be sold through Hyundai’s Signature outlets that have a staff trained to ensure a premium customer experience. The aim of these outlets is to provide a curated experience to customers that tend to start their car buying process digitally. In the last two years, Hyundai has planted 246 Signature outlets across 125 cities.

Meeting the needs of tech-savvy customers

The last few years have also seen a sudden boom in technology-based features in cars. Having a connected vehicle is becoming common by the day and now we are seeing the advent of autonomous vehicles. We asked Tarun if they have seen a shift in the customer mindset that matches the rapid change in the auto sector. He replied, “The Indian customer is evolving and wants global technologies”.

The new Tucson comes with Level 2 ADAS and has 16 safety and three convenience features. He further added, “I believe this will be very good not only for the people sitting in the car but also for people outside.” Some of the features found in the new Tucson include adaptive cruise control, forward collision warning, lane departure warning, driver alert assist and more. On top of this, it also has more than 60 connected features and supports offline voice commands.

While Hyundai had introduced connected features with the launch of Venue, the Korean carmaker decided to introduce ADAS to their range with their flagship product. It is possible that we might see the same trickle down to other models but we did wonder why the company chose a top-down approach. Tarun told us that Hyundai does not believe in just picking up a global technology and implementing it as is in their Indian product. The ADAS in Tucson has been tested and tweaked to work well on our roads. Depending on the response from customers, the technology will also be introduced in other Hyundai vehicles. He said, “we have always tried to tune in our propositions with the Indian customer’s requirement.”

Launching a high-tech and feature-loaded vehicle sounds exciting but in today’s time, one has to also be aware of the harsh reality of semiconductor shortage. All automakers have been hit by the limited supply of chips and this has had a negative effect on their ability to produce cars. Tarun said that he is hopeful about the situation improving as Hyundai witnessed better supply in the month of June. “At the same time, we cannot say that we are totally out of it”, he added. According to Tarun, there is a possibility of the semiconductor scarcity to be a problem till 2023. “We are making all efforts to see how we can supply those 1,30,000 back orders for which the customers are waiting, especially going into the festive season.”

Globally, the Tucson is available with a number of configurations including a long and a short wheelbase version. In India, we will be getting the long wheelbase version only and it is in fact the biggest vehicle in its segment. The decision was made based on the company’s research. “For this segment of customers, our research suggested that customers wanted a long wheelbase. In a five-seater option it means that there is more space in the car”, explained Tarun Garg.

Talking about future product plans, Tarun said, “As far as SUVs are concerned, we now have a bouquet of five SUVs, we have already announced the launch of Ioniq 5 and there will be some more N Line models coming in.” Hyundai brought their performance-focused N Line marquee to India with the i20 N Line. It remains the only vehicle to sport the N Line badge since its launch last year and we have been waiting for information on more N Line models. This conversation definitely confirms that Hyundai has multiple N Line models in its product pipeline for India.

Follow us on
Latest News
Here’s why vegan-based products are good for your lifestyle
Four ways D2C brands can use tech, data to excel during festive season
Chai Pe Charcha with BrandWagon
Overall August exports steady but motorcycles under pressure
Electric Vehicles on a journey toward sustainability and must benefit from uniquely curated insurance options
Seller base on Amazon Business increases by 364% in the last five years
Samsung, Xiaomi, others will have to put more RAM, storage in their entry-level phones to run Android 13 update
Photos
Queen Elizabeth 1926 – 2022: Her life in pictures
20 hours agoSeptember 9, 2022
Kingsway is history now! PM Modi inaugurates Kartavya Path, unveils Netaji statue at India Gate – See stunning photos
24 hours agoSeptember 9, 2022
PM Narendra Modi to inaugurate ‘Kartavya Path’ at India Gate on September 8 | Photos
2 days agoSeptember 8, 2022
Read More
×
EV Policies – Getting ready for the next decade
Ohme debunks some EV charging related myths
At Rs 10 lakh, Tatas to roll out cheapest EV
EV batteries: To swap or to charge, that is the question
FADA says dealer viability and policy issues continue to remain concerns for automotive dealers across segments
Innoviz wins order to be direct LiDAR supplier by Asian OEM