In the inaugural speech at EXCON 2022, Basavaraj Bommai, the Chief Minister of Karnataka said that the construction sector will have a major contribution to Prime Minister’s vision to make India a $5 trillion economy. 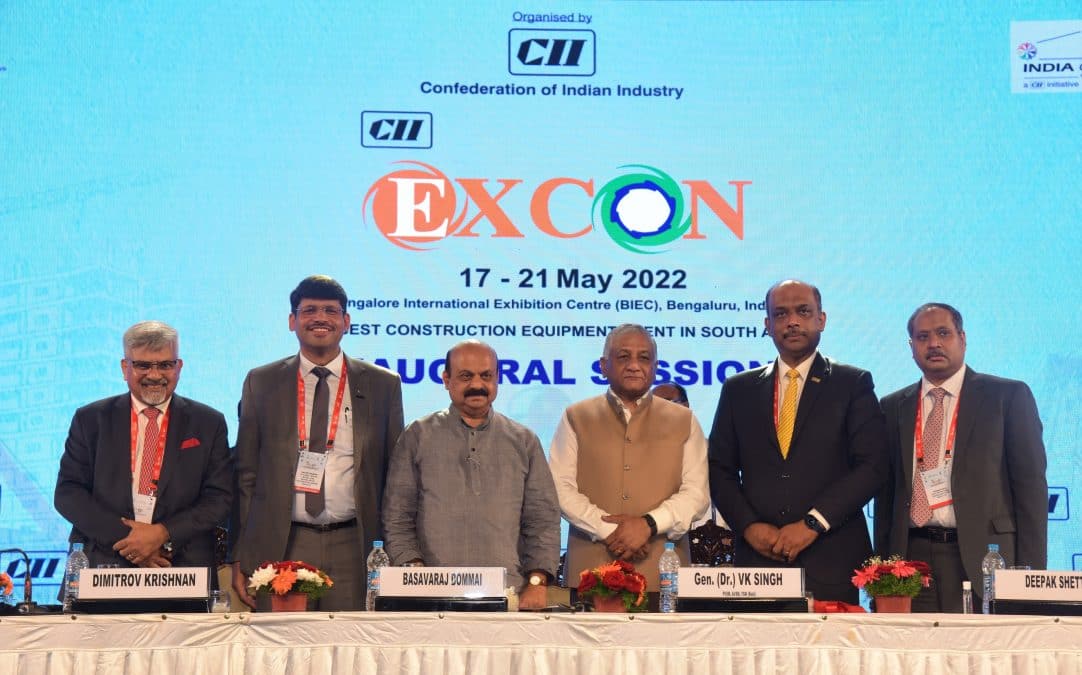 Delivering his inaugural address at the 11th edition of CII EXCON, South Asia’s largest construction equipment trade fair organised by the Confederation of Indian Industry (CII) today, Basavaraj Bommai, the Chief Minister of Karnataka, said, “The infrastructure sector is receiving an intense push from the government, propelling India’s overall development and GDP. The new policies announced by the government of India would ensure the time-bound creation of world-class infrastructure in the country, making it India’s new identity globally.”

Basavaraj said that the construction sector will have a major contribution to Prime Minister’s vision to make India a $5 trillion economy. To achieve this goal, the government is embarking on major infrastructure and industrial projects worth Rs 100 lakh crore. “Though our major focus should be growing exponentially in the country by advancing our technologies, the inclusion of people at the bottom of the pyramid is also critical since they are the movers of the economy. We urge the industries to collaborate with them to further enable the CE (construction equipment) sector.”

The chief minister mentioned that Karnataka offers huge business opportunities for the construction industry, as it is embarking on major infrastructure development projects in roads & flyovers, industrial infrastructure and power.

Participating as the Guest of Honour, General V K Singh, Minister of State for Road Transport & Highways, government of India, said, “India is an emerging hub for construction equipment, component outsourcing base and design base. The private players in the construction industry must concentrate on automation, adoption of advanced technologies and global best practices, usage of alternate fuels, and innovations in using waste materials as raw materials for their construction projects to diminish the cost of construction and rate of pollution. Infrastructure must be sustainable and the industry should take measures to enhance the quality at an affordable lifecycle cost. India is working hard on hydrogen fuel technology and solar energy since we consider them the future of the country. The CE industry must be prepared for the competitive market situation and focus on Industry 4.0 for revamping itself.”

Deepak Shetty, chairman, CII EXCON said that “This is the 11th edition of the EXCON and our theme this year is Building India for a New World: Competitiveness, Growth, Sustainability, Technology. India must become less dependent on imports to build large scale infrastructure projects, roads, ports. Hence, developing and embracing technologies is crucial so that we can expand our innovations and become an export hub globally. The three key strategies that will help us to fast-track developments are – focusing on new growth drivers, understanding the significance of rural economy and curating a roadmap for alternate fuels.”

The role of smart technologies and innovation in India’s infrastructure development is essential in achieving the vision of making India the global hub for construction equipment manufacturing. As a result, there is a need for rapid investments across infrastructure for sustainable development in the country.

During the inaugural session, dignitaries at EXCON presented the ‘Women Building India Awards’ to recognise the inclusion of women in the infrastructure industry. Women champions from Cummins India, Volvo CE India, Schwing Stetter India and L&T Constructions & Mining Machinery were recognised for their efforts towards the same.

While proposing the vote of thanks, Dimitrov Krishnan, co-chairman, EXCON said “Indian CE industry, being the 3rd largest market in the world, has shown remarkable progress over the years. We aim to become the 2nd largest CE market in the world. EXCON will reflect on the theme elements at the exhibition and set the pace for Atmanirbhar Bharat in infrastructure development in the country.”