The Bhoot teaser was shared by Bollywood director Karan Johar, who is also the film’s producer, on his official Twitter handle. 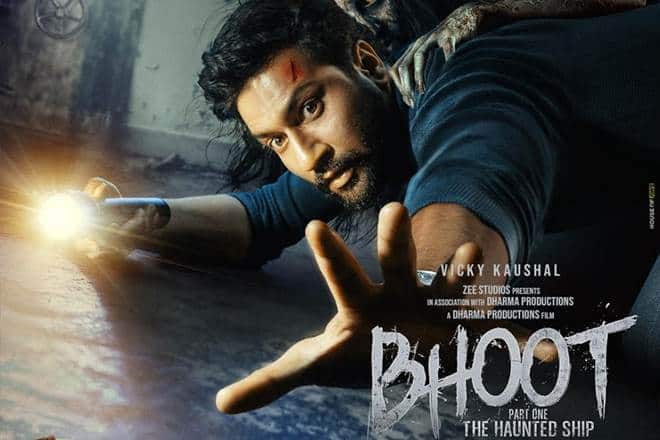 As the teaser begins, we see Vicky Kaushal, the lead in the movie, walking inside a haunted and abandoned ship.

The official teaser of Bhoot – Part One: The Haunted Ship released on Friday, January 31 and it is sure to give you a thrilling ride! A boon to all the horror movie buffs, Bhoot: The Haunted Ship teaser is the first of the Bhoot franchise, reportedly a trilogy. The Bhoot teaser was shared by Bollywood director Karan Johar, who is also the film’s producer, on his official Twitter handle. Tweeting the video, Karan wrote, “The fear will swallow you whole! Watch out, TRAILER DROPS ON MONDAY! #BhootTrailer3rdFeb”.

As the teaser begins, we see Vicky Kaushal, the lead in the movie, walking inside a haunted and abandoned ship. The walls of the ship have a trail of blood-soaked handprints all over. Following the prints, Vicky is lead to another room inside the ship, where he focuses the light of his torch on a wall that has his face printed with bloody hands. Soon, blood starts to flow through his eyes in the photo.

Vicky, taken aback, falls back on a wall of the ship with shock. In mere seconds, he is grabbed by a dozen hands that pull him tightly towards the wall behind him. Struggling Vicky, unable to escape their grip, gets sucked-in within the wall. Scary as it looks, the teaser of Bhoot: The Haunted Ship is certain to give its viewers a chill in the spine.

Starring Vicky Kaushal and Bhumi Pednekar in lead roles and produced under the Dharma Productions banner, Bhoot – Part One: The Haunted Ship is all set to release on February 21, 2020. The release date was shifted from the earlier one, November 15, 2019, to reportedly accommodate Ayushmann Khurrana’s Bala. The film has been directed by debutant director Bhanu Pratap Singh and produced jointly by Hiroo Yash Johar, Karan Johar, Apoorva Mehta and Shashank Khaitan.

The Bhoot movie poster was shared in June last year, which had Vicky screaming while peeping out of what looked like the window of a ship. The window has broken glass and had bloodstains on the glass panes. Vicky’s face was grabbed by a hand with enormous nails.