It can be hard to tell orcs apart at first. The fictional giants of the ”Warcraft” video game franchise all have mean faces, protruding tusks and muscles so massive, they make The Rock look puny. 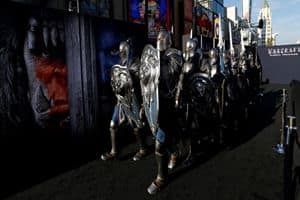 For anyone unfamiliar with the fantasy game's characters and story lines, ''Warcraft'' is little more than eye candy, a visual spectacle with a backbone of well-trod genre tropes.(Reuters)

It can be hard to tell orcs apart at first. The fictional giants of the ”Warcraft” video game franchise all have mean faces, protruding tusks and muscles so massive, they make The Rock look puny.

So it may take a while for non-gamers to figure out who’s who in the battle of orcs and humans at the center of the ”Warcraft ” film, which complicates an already dense mythology. Once it becomes clear that there’s a civil war within the orc race about whether to eliminate or align with the humans, the big-screen adaptation from director and co-writer Duncan Jones is a little easier to understand.

For anyone unfamiliar with the fantasy game’s characters and story lines, ”Warcraft” is little more than eye candy, a visual spectacle with a backbone of well-trod genre tropes. There’s just no way to become as invested during a two-hour movie as a gamer who’s spent years, maybe even decades, immersed in the rituals and traditions of the worlds of ”Warcraft.”

Plus, the humanoid orcs rely on so much digital animation to come alive that at times the whole movie looks like a video game, which obviously suits the material here but can still take a little getting used to visually. (This critic’s screening was in IMAX 3-D.) And it is certainly a spectacle, with elaborate castles, armies of angry orcs and a villain who dramatically sucks the life from his victims, leaving them shriveled and deformed.

Voiceover at the start of the film explains that humans and orcs have been at war for ages. The orc planet is dying, so they’re out to colonize new territory, which they access when their ruler, Gul’dan (Daniel Wu), uses his powers to open a magic portal. The escaping orc clans storm in and kill everything. One clan leader, Durotan (Toby Kebbell), is a rebel. He questions Gul’dan’s destructive approach and suspects he may be relying on evil forces, which, of course, he is.

Orcs are invading the world of Azeroth when the leader of the humans, King Llane (Dominic Cooper), gets word of their imminent arrival. He turns to his top warrior, commander of Azeroth’s military forces Lothar (a smoldering Travis Fimmel), and top wizard, Guardian Medivh (Ben Foster), controller of Azeroth’s magical powers.

Meanwhile, young magician Khadgar (Ben Schnetzer) endears himself to the operation when he discovers evidence of an evil force lurking in the human kingdom.

Containing this powerful energy is ultimately the theme of film, as it is of so many fantasy, superhero and sci-fi stories. It’s like the Force or the Ring or the Infinity Gauntlet or the Allspark. Only the force in ”Warcraft,” called ”the fell,” is purely wicked, so evil it can consume the good – perhaps an allusion to Biblical notions of ”the fall.”

The ”Warcraft” mythology is extensive and rich, as it would have to be to sustain five video games and a series of novels. That’s a lot of lore to pack into one movie, though this film is clearly set up for a sequel should the audience demand it.

Without the franchise backstory, ”Warcraft” is a big-budget fantasy-action film with lots of large-scale, epic fight scenes between Mr. Olympia-sized aliens and regular humans. When an orc throws a horse at one point, it’s almost more painful than when a character dies, since the moviegoer’s connection with the characters is so superficial.

As escapist summer fare, ”Warcraft” works because the action is ample and the orcs look cool, with pierced tusks and spiked armor evoking a ”Mad Max” aesthetic, even if it isn’t always easy to tell them apart.

”Warcraft,” a Legendary Pictures release, is rated PG-13 by the Motion Picture Association of America for ”extended sequences of intense fantasy violence.” Running time: 123 minutes. Two stars out of four.