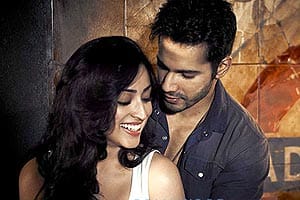 Varun Dhawan starrer ‘Badlapur’ box office collections are rising steadily as the movie continues its good run in the domestic market, adding more than Rs 6 crore in the second weekend. The ‘Badlapur’ is now eyeing the Rs 50 crore mark as all new releases, except ‘Dum Laga Ke Haisha’, failed to make any impact with the audience.

The transformation of Varun Dhawan from a romantic hero to a man with a rugged look and revenge in his eyes, has been enough to create the right buzz for the film as  ‘Badlapur’ box office collections move to Rs 45.84 crore. The Varun Dhawan-Nawazuddin Siddiqui starrer has now overtaken Ranbir Kapoor ‘Roy’ (Rs 44.52 crore) to become the second biggest grosser of the year behind Akshay Kumar’s ‘Baby’ (Rs 95.56 crore).

‘Badlapur’ maintained it domination at the box office, by clocking Rs 36.31 core in the first week, which is only topped by Akshay Kumar’s ‘Baby’ (Rs 63.82 crore) and ‘Roy’ (Rs 41.77 crore). The film has garnered Rs 24 crore nett over the weekend, becoming the third highest weekend grosser of 2015.

Interestingly, the revenge drama’s unusual plot has found resonance with both the single screen as well as multiplex audiences. “The response to Badlapur has been phenomenal and the film surprised everyone. Coming on the back of the much reviled Agent Vinod, Raghavan has surprised the trade,” says Gautam Dutta CEO PVR Ltd, as he informs that the film had a healthy occupancy of 45 per cent on the opening day and even picked up after the good word-of -mouth later in the the weekend.

Agreeing to this, Adil Shaikh, manager, G7 cinemas that has four shows of Badlapur in Gaiety, said: “The film has seen an 80 per cent occupancy even on the day of India-South Africa match.”

Dutta adds that generally while March is slightly slow in terms of business as it is exam time across the country, the occupancy numbers are a proof that people are ready for an alternative to cricket.

But all is not well at the box office. Exhibitor-distributor Akshaye Rathi amusingly remarks that after a slow business in the last two months in which only few films (like Baby) did well, he is getting ready for a slump in March as well. “There’s hardly anything to look forward to,” he says as he also talks about the previous week’s releases like Roy and Shamitabh, which didn’t do too well. In fact, Rathi stopped tracking the collection of Roy after its minuscule performance.