Star India will broadcast the second season of the Pro Kabaddi League (PKL) in five languages and across eight channels on its network. 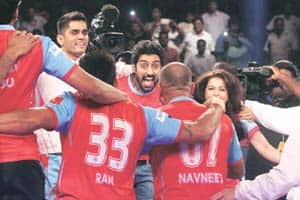 The sports format will commence on July 18 2015 and will be broadcast in English, Hindi, Telugu, Kannada and Marathi across the Star network.

Star India will broadcast the second season of the Pro Kabaddi League (PKL) in five languages and across eight channels on its network. PKL had 435 million viewers nationwide last season. It delivered 2.3 billion-plus impressions on social media networks. in fact, Star claims it was one of the most-watched sport properties in the country, with the season finale alone recording a reach of 86.4 million. The sports format will commence on July 18 2015 and will be broadcast in English, Hindi, Telugu, Kannada and Marathi across the Star network.

The English feed will be broadcast on Star Sports 2 and Star Sports HD2, the Hindi feed on Star Sports 3, Star Sports HD3 and Star Gold. Maa Movies will broadcast the Telugu-language feed while Suvarna Plus will telecast the Kannada feed. Star is a majority stakeholder in Pro Kabaddi League. The league is owned by industrialist Anand Mahindra and cricket commentator Charu Sharma’s Mashal Sport, in which Star has 74% stake.

This is the second year that Star has had to come in as the property’s title sponsor. Media buyers said that ad rates were going at much less than a lakh for 10 seconds.

Star chief operating officer Sanjay Gupta said they have decided to “nurture” the sport by retaining the title sponsorship for the second season of Star Sports Pro Kabaddi League. Gupta said, “The league has its own standing and continues to enjoy overwhelming demand from sponsors on its own for season two. Leading brands across categories like Thums Up, VIP Frenchie, Flipkart, Bajaj Electricals and TVS Motors have already signed up as associate sponsors for the Pro Kabaddi League and we are in advanced stages of multiple other conversations with a lot of interested brands.”

The network has committed Rs.20, 000 crore as investment in sports. This investment is being phased out over the years and a lot of it is in the area of non-cricket sport. “Since 2014, we have made significant progress towards making India a multi-sport culture, with the launch of Star Sports Pro-Kabaddi League, Hero Indian Super League and a renewed commitment to cricket with the renewal of the ICC rights for the next 8 years.” Says Gupta, “As an entity, we are committed to reinvent the cricket experience and develop a multi-sports culture in India with investment in premium sports content, multi-platform access and the development of local leagues.”

Mihir Shah, vice-president at Media Partners Asia (MPA), however said that the broadcaster was taking a long-term view on its sport investments. “Among all non-cricket leagues, it is Kabaddi that perhaps resonates at the grassroots and holds great potential,” he said.

Indranil Das Blah, chief operating officer at Kwan Entertainment and Marketing Solutions, said Star was looking for the right kind of partners to come along and willing to put up with short-term losses. “Rather than lowering the price and diluting the equity of the property, they have chosen to come in as the title sponsor themselves. This is absolutely the right thing to do. Star may take a few years to reap the dividends of some of these properties.”