Shamitabh review: A Voice in the Dark

A reedy, scrawny, voice-less wannabe actor rides piggyback on a hypnotic, heavy baritone to super success in Bollywood: the premise of Shamitabh is fabulous… 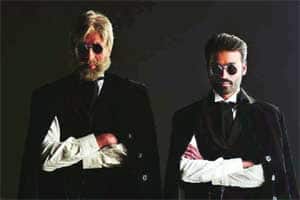 A reedy, scrawny, voice-less wannabe actor rides piggyback on a hypnotic, heavy baritone to super success in Bollywood: the premise of Shamitabh is fabulous on many levels. Because of the cross-connections it makes with real life and reel life. Because of what we already know about the actors, stored in our memory banks. Because of its sheer degree of meta-ness.

Danish (Dhanush) and Amitabh (Bachchan) are like “paani” and “whisky”: the former is an unprepossessing runaway, like a million others, who fetches up in Mumbai in order to become a star; the latter is a wasted alcoholic with a voice that we have known and loved, on and off-screen. The coming together of the two — the “mixture”— becomes Shamitabh, super-successful Bollywood hero, aided and abetted by a bright young thing Akshara (Haasan), a small cog in the big movie business.

Much of what constitutes stardom, the way it is constructed in the world’s largest film industry, is part of the film. The connection between how a person looks and how he sounds, and how that contributes to the making of a star, fashions the two halves of Shamitabh. And the predictable face-off between the two provides some of the film’s most alive moments.

The trouble is that there are not enough of those moments in which the two riff off each other, the others around them being just admiring ciphers. Large passages are devoted to Bachchan and his soliloquies. Why, when we already know what a magician he is with his voice? They make the film a one-sided drone.

Also, so much of suspension of disbelief (how possible is it for an actor to be voiceless and not be rumbled within a moment?) needed to have been balanced by the sort of flourish, which makes us say Okay, I buy into this, but only because you are showing it to me with quirk and smartness.

Shamitabh swings between being intelligent and banal, the latter more so when it begins worshipping at the altar of the nation’s most beloved voice.

Debutant Haasan, an intriguing mix of mom Sarika and dad Kamal, has promise. Dhanush shows what a real actor can do with just body language: he is fluid, twists and turns, and says what he wants to, without using any spoken words.

Paradoxically, it is Bachchan, whose voice powers the movie, who is not able to break free from the pedestal he is put upon: the lines between Amitabh the superstar playing Amitabh the drunk wastrel are so blurred that the film becomes more paean than anything else, burying the character and the story.

Shamitabh had the potential to use irony and knowingness and a self-awareness, and the presence of the most durable star in Bollywood whose velvet-and-iron rumble has become part of the national soundtrack, to give us an unforgettable story of ego and identity, rejection and acceptance, success and failure. There are a few moments which sparkle, and we laugh in acknowledgment. And Dhanush and Haasan bring freshness to the film. But the rest of it is overpowered by unabashed reverence.