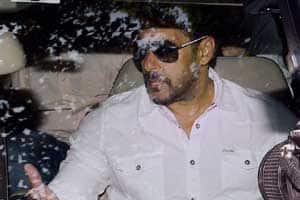 Salman Khan was sentenced to five years imprisonment for culpable homicide not amounting to murder in the over 12-year-old case when his Toyota Land Cruiser ran over five people sleeping on the pavement outside American Express bakery in suburban Bandra, killing one person and wounding four.

Abhijeet Bhattacharya criticised the court’s verdict and blamed the homeless for the 49-year-old star’s current plight with comments like ‘footpaths are not for sleeping’.

Kapoor, 62, slammed Abhijeet Bhattacharya and Ajaz on Twitter over his reaction in Salman Khan case.

“Ashamed of Abhijit the singer and some Ejaz Khan. Bunch of idiots and non starters,” he tweeted.

“Sorry to say but only wannabe Chamchas of Salman siding him with ridiculous support. Hum bhi well wishers hain (We are also well wishers) but give logical explanations.”

The actor stuck to his stand when he received some flak from fans but clarified that he supported Salman.

“My saying Chamchas was for Abhijeet’s inhuman comment and Ejaaz saying about the law. People misunderstood me. I said am with Salman earlier,” he said.