‘PK’ hit theatres on Friday in what was expected to be a box office collections triumph for Aamir Khan. That did not happen, but… 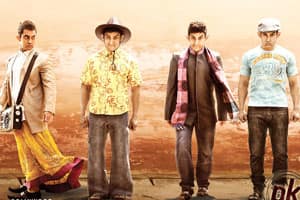 The ‘anticipation’ over Aamir Khan starrer ‘PK’, which released Friday, has been deflated, considerably, as far as box office collections are concerned.

According to reports, ‘PK’ box office collections have been Rs 26.63 crore on Day 1. Earlier, the business of the movie had been reported to be Rs 30 crore but was later rectified.

The producers of ‘PK’ and Aamir Khan himself, were quite secretive and coy leading up to the release of the film about its content, building up the anticipation among the fans who were expected to rush to the theatres in droves.

While the crowds in cinemas did jump, they were nowhere near what the year’s best movies have been able to generate and where the plots were more or less out there in the public domain much before the films themselves released. Is this a lesson for those who may look to follow in Aamir Khan’s footsteps? Time will tell.

A number of reasons may have been responsible for Aamir Khan not being able to generate first day records. Among them the foremost is that Friday was not a holiday (some top movies of 2014 raced ahead because they released on Friday when it was a holiday and in fact, some reaped rich rewards due to the super-weekend too).

The other reason may well be that once people saw the ‘nude’ poster of Aamir Khan, the rest of the message was clear to the fans – there would be no ‘full Monty’ by the superstar – everyone knew that that was not forthcoming as far as Anushka Sharma too was concerned. The highlight was already out and the rest, whatever it is, could never equal the sensationalism of the image.

Another reason that hit ‘PK’ box office collections was the high price of tickets, even after Aamir Khan himself had gone on record to say that the rates would be kept in control – this led many theatres to actually ‘boycott’ the film, not to mention, also keeping many cinegoers, who would have wanted to see Aamir Khan in action, at home.

#PK Tweets
The immediate result was that Aamir Khan did not perform box office magic on Friday and he fell by the wayside in terms of records. The movies that  released in 2014 that beat Aamir Khan's 'PK' include Shah Rukh Khan's 'Happy New Year', which garnered box office collections of Rs 44.97 cr, despite not having any plus point except the presence of SRK; Ajay Devgn's 'Singham Returns' with box office collections of Rs 32.09 cr was another high-flyer of the year. As far as all-time records go, 'Dhoom 3' took Rs 36.22 cr, 'Chennai Express' Rs 33.12 cr and 'Ek Tha Tiger' Rs 32.93 cr - the first 2 in 2013 and the third in 2012. [caption id="attachment_21530" align="alignnone" width="450"]

Aamir Khan during the shooting of 'PK'. (Bollywood Hungama)[/caption] Having said that, it is by no means certain that 'PK' box office collections are faltering. The week-end is upon us and Christmas is also around the corner and people just might want to start their end-of-year celebrations a little early. [polldaddy poll=8537418] However, Aamir Khan did manage to Salman Khan's 'Kick', which collected Rs 26.40 crore. [caption id="attachment_20990" align="alignnone" width="630"]