By day 8, which was a Friday, Saif Ali Khan’s Phantom box office collections collapsed to a mere Rs 0.93 crore in the face the onslaught of new release, John Abraham’s Welcome Back. 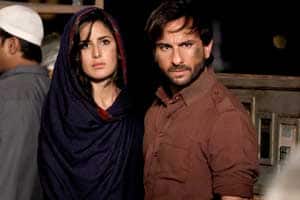 With no big release happening alongside it, Phantom was expected to dominate the BO collections and that is exactly what it did, but grand expectations from the movie, if any, were dashed by the time the opening weekend was over.

By day 7, which was a Thursday, everyone was more focussed on Friday’s releases and as a result, Phantom managed a take of just  Rs 2.88 crore.

Friday, with Welcome Back released, Phantom took a backseat and managed just Rs 0.93 crore on (day 8), for a domestic market total of Rs 48.33 crore. If the foreign take is added, the collections move up to Rs 54.9 crore.

Tell us your view, take the poll

Phantom, which revolves around global terrorism, is an adaptation of the novel “Mumbai Avengers”, which was based on the post-26/11 terror attack.

The film harks back to the festering wounds inflicted on India by the 2008 terror attacks on Mumbai and constructs a wishful scenario: each of the perpetrators of that crime is punished by an intrepid agent unleashed by RAW.

The film has run into a bit of a controversy, but not in India, with Medecins Sans Frontieres/Doctors Without Borders saying it will sue the filmmakers as they have put their staff, who work in war zones, in danger – they particularly spotlighted Katrina Kaif who goes around totting a gun in the film. Medecins Sans Frontieres says its workers are never armed and the film can give a wrong impression in areas riven by strife.